By Richard F. Kelly, Special to The Chronicle 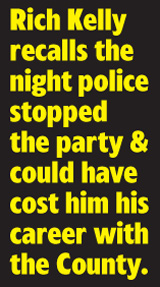 Saint Patrick’s Day in Glens Falls is, has been, and will always be a special holiday for the residents of Glens Falls.

In the 60’s and 70’s few events could rival stops at Sullivan’s, Hart’s, Toomey’s, the Ridge Manor, the Blue Room, the Embassy, Herb’s and The Lantern Inn, to name a few.

All venues welcomed partygogoers, but — like ancient Rome — on Saint Patrick’s Day all roads led to Ward One.

Every sidewalk had the appearance of a disjointed Saint Patrick’s Day parade. Every shade of green was on display adorning all body types from petite to portly.

One annual highlight at East End watering holes was the arrival of the personalities who made the East End special. It could be the dancing duo of Tom and Jean, Barstool Larry with a pocket full of quarters (his standard tip at every establishment for over 40 years), Red, Sleeper and unmistakable belly laughter confirming that Dango is in the building.

One Saint Patrick’s Day was not as festive.

The jaunt from Orville Street to Broad was a quick two blocks and this evening was beginning on fresh legs.

As was customary, the crowd was a nice mix of mostly graduates from Saint Mary’s Academy and Glens Falls High School.

Two classmates had secured a table and I joined “Killer” and “Hick” with 3 Buds toasting the “3 Buds.”

It was going to be a memorable evening.

The first few beers slid easily as I tried to play catch up with the afternoon crew who now crossed over from beer to drinking shots of Irish whiskey. The shots are usually a parting nightcap and would have to wait a few hours.

Unfortunately, the camaraderie took a hostile turn as a half dozen Police Officers entered the building.

“Hands on the table and everybody stay where you are.”

Thinking it was a joke, someone yelled “But I’ve got to take a leak.” Laughter broke out as someone retorted, “I hope it’s just a leak.”

“Shut up and hands on the table….”

This was no joke.

A team of two Police Officers approached each table, handcuffed the assembled and marched each patron out the front door to an awaiting patrol car.

When it was our turn, handcuffed, we asked the same questions: “Why?” “What did we do?” “Is this legal?”

The Kent State murders were fresh in our memory and the fact that four students had been shot and killed for no reason other than just being students, we complied.

As we were led into the Police car, a photographer from the Post Star was taking pictures of every person exiting the bar. As strange as this sounds, the local paper was given advanced notice of the raid and had a reporter and photographer at the scene.

An Assistant Warren County District Attorney stood on the side of the patrol car making everything look legal.

I looked directly at the Assistant DA and said, “Hello, Peter.”

A quick glance, nod, and no reply indicated a concerned ADA.

After a short ride to the Police Station and, prior to booking, we were all assembled in one room,

To say some were scared was an understatement. With no bathroom facilities and an afternoon of drinking, soiled jeans were a sporadic consequence triggered by either alcohol or fear or both.

The arrests were an equal opportunity occurrence as male and female were booked and strip-searched “regardless of race, creed, color or national origin.”

When it was my turn, my mind raced from losing my job, a police record, to possible jail time. It was a nightmare.

“What were you doing at the bar? Did you drop any drugs in the bar, any drugs in your car?” With a firm “no” to every question, I asked the Booking Officer: “Why am I being arrested, I’m a probationary Caseworker for Warren County Social Services and I will probably lose my job. To answer your question, I went to Sully’s to celebrate Saint Patrick’s Day, we’ve gone to Sully’s to celebrate every year since I was 18.”

Now, for the first time, the Booking Officer realized his hand ink entry in the official log was real, had immediate impact with lifelong consequences probable.

His harsh demeanor receded and an empathetic tone was now understanding. “You are being arrested for Loitering for the Purpose of Purchasing Narcotics. Wait here.”

He returned with a higher-ranking officer and explained my situation along with the obvious — that these people who have been arrested are simply young adults, kids celebrating Saint Patrick’s Day.

The higher-ranking officer’s stern reply: “Everybody, no exceptions.”

I was strip searched, booked and released. There were no drugs on me or on any of the 28 patrons in the bar. Imagine 28 young people in a bar, in 1972, and not a single needle, pipe, pill or joint.

It was obvious that an informant had given bogus information and succeeded in making the Glens Falls Police Department and the Warren County District Attorney’s Office look foolish.

The Post Star downplayed their complicity by burying the fiasco in the middle of the paper. The March 18th story of the raid was on page 20 and their wrap up report of March 20th landed on page 13.

I don’t recall a single photo or reporter byline.

I didn’t lose my job and continued my service with Warren County for an additional 38 years.

It was classified an “Illegal Arrest,” but if asked if I was ever arrested, the answer is “Yes.”

The records, booking documents and all related information have been permanently sealed.

Had this occurred in a major city, it may have been a bigger story, highlighted in a plea for constitutional rights, protection of individual liberties, right of Irish Assembly and memorialized by a historic marker in front of Sully’s West on Broad Street.

With tongue in cheek, my suggestion for the plaque:

As Sergeant Joe Friday might have said: “The story you have just read is true, the names have been abbreviated and everyone was found innocent.”

Humor has been a centuries old diversion for the Irish combating slavery, famine, blight, and most other injustices inflicted by the English.

Hardened by centuries of abuse, “Fighting Irish” is a term of endearment and laughter will always be the best medicine.

Irish Alzheimers dictates that we only remember the bad times and a St. Patrick’s Day memory of 50 years ago confirms the early stages of the disease.

Glens Falls will always be the best place in the world.

Enjoy a cold beer this Saint Patrick’s Day and toast to the “Sully’s 28” on our 50th Anniversary.

On Monday, March 20, 1972, The Post-Star and Times published the following story:

Glens Falls police, who said the raid was made after illicit drugs were found on the floor of the bar, charge 27 of those arrested with loitering for the purpose of obtaining illegal narcotics.

One woman was charge with possession of a dangerous drug, sixth degree, a misdemeanor. The charge against her was dismissed when she produced a prescription authorizing the drug in question.

Police said earlier that two undercover officers inside the bar were joined about 10:30 p.m. by eight uniformed men. Patrons of the bar were herded together on the dance floor, handcuffed and then escorted to city jail where they were booked, fingerprinted and searched.

Nadeau issued a blanket order sealing the record of all 28 persons arrested.

“In connection with the raid that took place Friday, March 17, narcotics were found on the premises.

“After discussion by appropriate authorities, it was decided that no charges be presented against any individual.

“A court order was issued that all records be sealed.”

Cronin declined to elaborate on his satement [sic].

Assistant District Attorney Peter D. FitzGerald, who reportedly was consulted before the raid began, left the area on a vacation Saturday morning.

Share
Previous Our March 17 front page
Next Our music writer Jason, on the Ukraine walk in Glens Falls