Our music writer Jason, on the Ukraine walk in Glens Falls

This past Sunday, the Glens Falls community came together to show their support for the people of the Ukraine with an amazing display of unity. By 1 p.m., well over 200 people of different ages and backgrounds stood side by side, braving the below-freezing temperature, and carrying flags, signs and wearing blue and yellow (the colors of the Ukrainian flag), preparing to walk together from Temple Beth El on Glen Street and through downtown Glens Falls to end at Congregation Shaaray Tefila on Bay Street. 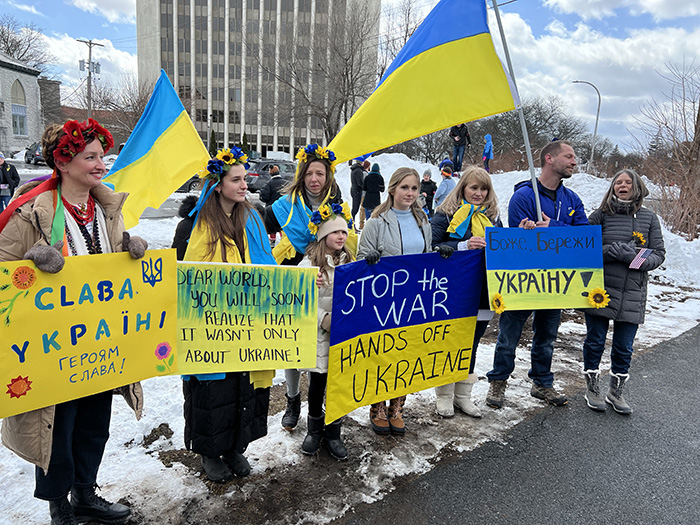 “Today is personal,” said Rabbi Joshua Gray, as he told a story of a Ukrainian woman’s bravery and selflessness while walking to asylum. “While most of us cannot be in their exact position, we can emulate what so many Ukrainians have been doing since the beginning of February —we can walk.” Rabbi Gray quoted Abraham Joshua Heschel in saying “I prayed with my feet.”

Rabbi Gray’s year-old daughter Lena sported an all yellow parka and son Cameron, 7, stood high atop a snowbank, chanting “No More War!” along with his friend, 5-year-old Zelda, daughter of temple member Rebecca Spraragen of Glens Falls. The sense of family was strong throughout.

I saw many familiar faces, including several members of the local music scene. I spoke with Wild Adriatic’s Travis Gray, who provided PA equipment, for some time about the cause (Travis is the brother of Rabbi Joshua).

I was honored to meet several new people as well, including Queensbury’s Linda Friedman, whose mother’s hometown was Munkacs, Hungary — which is now Ukraine. She came to the U.S. in 1949 after the war. Full of emotion, she stated, “This is just deeply personal and stressful.” 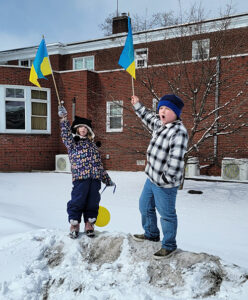 Another woman I was able to speak with was Queensbury resident Oksana Smith, who came here 25 years ago from Ukraine and was nanny to an American “son” Cooper Knapp. “My family is all here, but 47 million more people are my family now,” she said, tearfully.

Signs that read “Stop the War…hands off Ukraine” and other slogans of support were displayed, the Ukrainian National Anthem was sung, and cars honked their horns as they drove past.

However, the true message was the togetherness that was present. I felt it when the congregation passed me by as I took photos and video, and I only wished that I could be walking with them in that moment — but my role that day was to document, not participate. I only hope that my presence there helped to get the message out even further. It is needed.

The fund-raising aspect was a success. “We are still receiving online donations, but we raised close to $10,000.” said Meghan Gray. She said this money — a combination of online and in-person donations — will be donated directly to the Global Giving Organization, an accredited 501 nonprofit organization, which provides food, water, shelter and psychosocial support for all of Ukraine.

For those who still wish to donate, there is a PayPal donation site online through Temple Beth El.

To the people of Ukraine, Mrs. Gray added this: “Our support does not end with this event. We will continue to bring awareness, raise funds and do anything in our power to make a difference for you. We are here for you and we continue to walk with you until there is peace in your land.”