“Last year,” he said in the video, “we had about 730,000 acres of defoliation that was mapped. This year, based on the reports we’re getting from the public, and egg mass surveys that we completed over the winter, we’re expecting this year to be another big year of defoliation.”

The good news, said Mr. Cole in the video, is that “outbreaks usually only last two to three years, so we don’t treat regularly because the outbreak will end on its own.” He said “we can go 10 to 15 years in between” outbreaks.

“Deciduous trees (trees that lose their leaves each fall) can regrow a new set of leaves by July and can usually withstand 2-3 successive years of defoliation without being killed.”

But “defoliation does reduce the vigor and resistance of the tree, and it becomes more susceptible to pests and diseases,” says the DEC. “In the short-term, the tree can use sugars stored in its roots.” But “after multiple years or damage from other pests, these energy reserves are depleted. This can cause decline and death of the tree.”

Ms. Kubik says, “The main problem with spongy moths is their sheer numbers. A single egg mass can have upwards of 1,000 eggs in it, and in some areas, you can find over 20 egg masses on a single tree.” She said, “20,000 caterpillars of any kind on a tree is bad news.” She said this is the only moth whose numbers get that high.

DEC’s website provides procedures for tree care in relation to the outbreak.

“When populations are low or when you have just a few trees you want to protect, spongy moth caterpillars and adults can be killed by squishing them.

“Egg masses can be destroyed by scraping them off trees or other structures and dropping them in a container of detergent.”

Prior to their summertime spread, “in late April, sticky/barrier bands may be placed around the tree’s trunk to catch caterpillars when they hatch and crawl. These bands can be bought or made at home using common household materials.”

But DEC warns, “if you choose to use a barrier band, please check it often in case unintended wildlife pass through, and replace as necessary after rain events.”

Insecticide use is their final suggestion. “If you are considering spraying, start planning in fall or winter as many of these services book up early. Various insecticides for spongy moths are available at garden centers.”

But Ms. Kubik notes risks. “Insecticides used for spongy moths are usually non-selective and will kill any insect that comes into contact with them, be it a spongy moth or a monarch butterfly or anything else.”

She said they “can impact many beneficial native insects” and that “a known impact of spongy moth-targeted insecticide” resulted in “killing bees in significant numbers.”

“Insecticides should be used only when necessary and very carefully,” Ms. Kubik urged. She said, “follow ALL pesticide label instructions.” 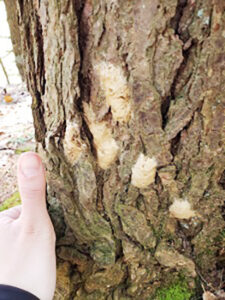 Mr. Cole said in the DEC video that the agency is combating the spongy moth in some places. “This year, we decided because last year was such a heavy defoliation year, that we couldn’t risk being defoliated again…

“The aerial treatment that DEC is conducting this year is…on state forest land and state parks. Those areas were chosen because they contain high value ecosystems where rare, threatened or endangered animals and plants live and need that ecosystem to survive…..”

Spongy moth is an invasive species, says the Cornell College of Agriculture and Life Sciences, because it is “non-native” and has “the ability to cause harm to the environment, economy, and/or human health,” explained Ms. Kubik. She said invasives “usually have…high reproductive rates and a lack of natural enemies that allows them to act invasively.”

The moth was actually brought here initially, Mr. Cole says in the video. He said just prior to the 20th century entrepreneurs planning for the emergence of an American silk industry welcomed the insect from overseas. Unsuccessful in the endeavor, they caused the insect’s upstate invasion.

The insects formerly known as Gypsy Moths are now called Spongy Moths. The change is the first action of the Common Names Project, a new initiative of the Entomological Society of America, zoologists who study insects.

The group determined that “gypsy” is a derogatory word used in reference to Romani people — traditionally nomadic people of Romania, Ukraine, Spain and other European countries.

It said, “While the use of an ethnic slur is enough reason to stop using a common name, the former common name was doubly inappropriate in that it linked to a group of people who have been treated as pests and the targets of genocide with an invasive pest insect that remains targeted for population control and eradication, all of which combined to have lasting dehumanizing effects for Romani people.”

In general, the Society said, “Problematic names perpetuate harm against people of various ethnicities and races, create an entomological and cultural environment that is unwelcoming and non-inclusive, disrupt communication and outreach, and counteract the very purpose of common names.”

For more about the Better Common Names project — and more of the Society’s history of Roma people — visit entsoc.org. Search for “Better Names Project” under Publications and Resources.