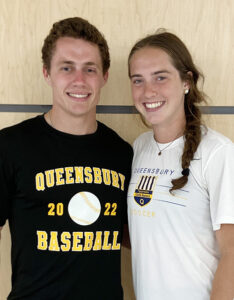 Queensbury High School will send two seniors, Brigid Duffy and Tyler Spaulding, to service academies — where both will also compete as Division I athletes.

Brigid will attend the United States Military Academy at West Point and play soccer and lacrosse.

Tyler will play baseball at the Air Force Academy in Colorado Springs.

Both Tyler and Brigid said they intend to pursue military careers beyond their five years of required service.

“I really do want to serve my country,” Brigid told The Chronicle. “And then on top of that, I’ll be able to play sports in college.”

Tyler said he is considering a degree in aeronautical engineering or military and strategic studies. Brigid is leaning towards civil engineering.

They were nominated for the academies by Congresswoman Elise Stefanik.

While the school year is just ending, their summer training camps are already nearly here. Brigid departs in a week.

Tyler will miss his high school graduation, having departed for boot camp. He received his diploma early, at Queensbury’s Senior Awards Night.

“I think what we’re going to be doing is really exciting. So being able to do it sooner, and not having to wait is good,” Tyler said.

“And then a lot of like, physical activity things,” said Brigid.

“Everyone, they’re like, oh, good luck. It’s gonna be so hard,” Tyler said. “I’m more excited than nervous. I think it’ll be fun.”

Ever the athlete, Brigid said, “I’m excited for the competitive aspect of it.”

While they’re both looking forward to what’s next, they have fond memories of their Queensbury athletic careers.

Brigid looks back on her senior year soccer sectional title. “We hadn’t ever [won sectionals]. So that was really cool,” she said. “And it was such a close game and so emotional.”

Tyler referenced a baseball game from his freshman year as a Spartan. “We lost to Ballston Spa at St. Rose, I think was a sectional of semifinal game.

“That was a cool game because that was a really good team. And we had a lot of seniors that I looked up to. But just to be on that field and share the field with a lot of those guys was cool.” 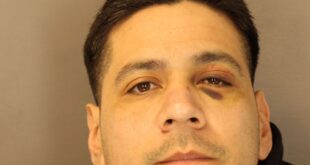