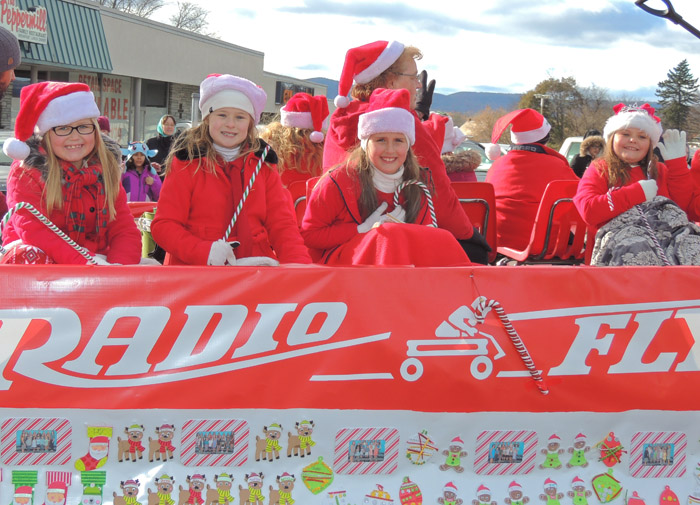 “The weather doesn’t look too bad, the people are all getting excited and I can feel the holiday spirit creeping in!”

Santa Claus will appear on a float built by Emerich Sales and Service employees and towed by an Emerich truck, Mrs. Quinn said. The parade will once again be broadcast live on Facebook.

Paradegoers are asked to donate a new in-the-box unwrapped toy for Toys for Boys and Girls, which benefits local children, or a non-perishable food item for the Moreau Community Center food pantry.

Donations may be made on the parade route just before the parade steps off at 1 p.m., Mrs. Quinn said.

The parade was in doubt after The Post-Star ended its run. No one came forward.

Then, in September 2017, Mrs. Quinn, a South High graduate and an occupational health nurse at Finch Paper, took the reins, and with the men and women of the South Glens Falls Fire Company involved, has kept the holiday tradition alive.

“The community support is incredible and I’m humbled to be part of it,” Mrs. Quinn said. “I cannot thank the Fire Company enough for their unending support and dedication to this parade.

“I’m so proud to be a member of the South Glens Falls Fire Company. Our motto here is #onefamily.  We support each other, cheer each other on, and protect each other. We hope to make Tom Tracy proud this year and have a stellar parade.”

Line-up for larger vehicles and floats needing assembly begins at 9 a.m. at Carriage Traders, Kingpin’s Alley Bowling Center and Smart Wash Carwash. Judging will start at 11:30 a.m. for floats, and all participants should be in position in the lineup by noon. Bands and color guards will be judged during the parade.

Mrs. Quinn said a change this year is floats and groups will line up down Route 9 from the intersection with Feeder Dam Road. For years they have lined up down Feeder Dam, which has caused some logistical issues.

That area of Route 9 from Carriage Traders to Pine Road will be closed starting at 9 a.m., she said.

14 sponsors stepped up to help

“We chose Father Tony because he is so pro-community, especially in these last few years,” said parade organizer Meg Quinn.

“From his professionalism and compassion during Trooper Timothy Pratt’s funeral, to his sensitivity and flexibility during the funeral of one of our own active members, to the effort put forth during the Common Roots Fire, Father Tony has been there.

“During the Common Roots fire he showed up to the scene and offered the church and Parish Hall to anyone who needed it, whether to pray or just to keep warm. It was a chilly March night and the kind gesture was much appreciated.”

Father Tony will ride in a wagon pulled by a team of mini-horses from the Washington County Draft Animal Association, Mrs. Quinn said. — Gordon Woodworth

Share
Previous In Greenwich: Why did 5-term Democrat Idelman lose to newcomer?
Next Our November 21 issue