Sean Curtis wasted no time after graduating from Corinth Central School in 2010.

“I graduated from Saint Anselm [College in New Hampshire] in 3.5 years,” focused on focus was international relations, politics, humanities, he told The Chronicle in an email exchange.

In his junior year he attended the University of London’s School of Oriental and African Studies, where he says he “studied under some fantastic Africa and Middle East specialists.

“Intelligence most interested me in my study of international affairs and it launched my career in the security department of Bank of America in Charlotte [North Carolina] and later iJET International in Annapolis,” Maryland, where he was an intelligence analyst. 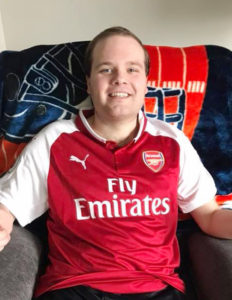 Just 25 years old, his career soared — and then disaster struck. “In May 2017 Sean started getting some cramping in his left hand and fatigue while running,” says Sean’s website.

“Cramping and massive muscle deterioration spread quickly across his body and on Dec. 6, 2017, exactly three months after his 25th birthday, he was diagnosed with Lou Gehrig’s Disease (ALS) by Johns Hopkins specialists.

“As a result of his diagnosis limiting his ability to work, Sean moved back in with his parents in southern New Hampshire and went into early retirement a few months ago.”

Asked this week by The Chronicle how he’s doing, Sean responds, “In May 2017 I was running 5-6 miles per day. Now I can only walk short distances with assistance. I am extremely weak and experience chronic fatigue, stiffness, and cramping.

“Despite being relatively sedentary, tired, and bored I just try to plug along and play the cards I’m dealt. It could always be worse.”

More of the email interview:

What are your fondest memories of growing up in Corinth? What did your parents do for a living? When did they move to New Hampshire?

“I enjoyed playing sports, attending Corinth First Presbyterian, and getting outdoors, especially hiking and snowshoeing. By 2015, my mom had retired from teaching at Queensbury Elementary School and my dad from the ACE Hardware warehouse in Wilton, and they moved to Tennessee. After I was diagnosed in December 2017, we moved in February together to Manchester, N.H.”

What do you best remember about your high school experience & friends?

“I remember having great teachers, coaches, and friends. I’ll always be indebted to them for nurturing my passions and channeling hard work toward a good career and feeling of self-fulfillment, despite my ‘short run’.”

Tell me about the work you did as an Intelligence Analyst for iJet International?

“I provided bespoke intelligence for private companies. I got to continue studying intelligence, security, and international affairs while keeping people safe and prepared while they work around the world.”

What advice would you give a Corinth high school student thinking about his or her future?

“Make success and effort your default modes, that way when you’re wrong about something or come up short, which will happen now and again, you’ll be better for it going forward.”

What do you hope is accomplished by the ALS 5K run/walk?

“I just hope everyone enjoys themselves and gets a nice breeze off the Hudson. And it would be nice if they remembered that run if they hear about the cure for ALS years from now.”

“We were both so crushed when he heard the news from him about his diagnosis,” Allison told The Chronicle from Gainesville, Florida, where she lives now.

“Sean was always an amazing friend and could make anyone laugh!”

Allison said, “I always thought that if you took the greatest Jeopardy player, comedian, and marathon runner and combined them into one person you would get Sean.

“He is TRULY deserving of this event and all the support he can get!!”

Event publicity says, “After his diagnosis, Sean began to reflect on the years he spent in Corinth. One wish that Sean had was to see a race run on the same trails that he used to run during his time at Corinth Central School District.

“To help fulfill Sean’s wish and aid Sean and his family in his fight against ALS, the Sean Curtis ALS 5K Run/Walk was created.”

The Sean Curtis ALS 5K Run/Walk is set for Saturday, April 21, in Corinth starting at the EMBA Field on River Street.

Registration begins at 9 a.m. and the race begins at 10, says press info.

“After the race, the celebration will continue on the EMBA field with baskets from local businesses for raffle, food, music, and much more fun!

“All proceeds from this event will go directly to Sean and his family to aid in their fight against ALS.”