By Jason Irwin
“Dr. Gator” is back, and will soon be prescribing one more dose of …

“Dr. Gator” is back, and will soon be prescribing one more dose of medicine — in the form of rock and roll — to his “patients.”

The popular Glens Falls area cover band known as “Dr. Gator’s Medicine Show” were the house band at Sandy’s Clam Bar for a long streak in the 1990s.

You might know them from around town or from their other current and past acts.

Well, the boys are back together for a slam-bam jam planned at Heritage Hall at the Cool Insuring Arena in Glens Falls on Saturday, May 16.

The show was just announced on Facebook last week, and it’s already shaping up to be more than just a band reunion. 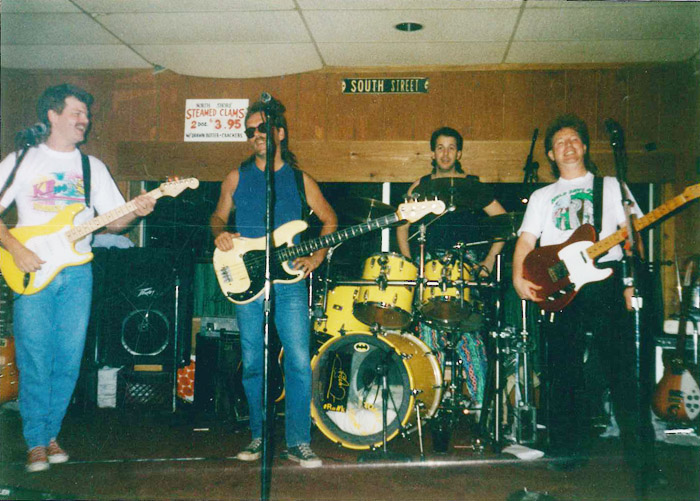 Dr. Gator’s Medicine Show, the house band at Sandy’s Clam Bar back in the 1990s, plans a Sandy’s reunion show at Heritage Hall on May 16. From the left: Phil Camp, John ‘Gator’ Gates, Frank Affinito and Johnny Clifford, back in the day.

The person organizing the event is a longtime friend of the band, Mike Sullivan.

“Sandy’s was the first bar I started going to when I turned 21,” he says. “I developed friendships with all the guys in the band. Johnny Clifford actually taught me how to play guitar. They were the premier party band of the 90s.”

Sandy’s, the long-time staple of South Street, is due for a customer and staff reunion since closing its doors in 2017.

Mr. Sullivan gave me the skinny: “I grew up in Sandy’s,” he says.

“Back in the day, this was THE band and Sandy’s was THE place. I’ve wanted to get these guys back together for a while now. I finally cornered Gator and got him to agree to it.”

He doesn’t know whether owner/operator Rich Mozal will attend, he says.

As for the band — they’re excited.

Phil Camp said, “We had a great time on stage. The set list was totally geared for dancing, but the between song banter is what I remember most. Gator would say something, then Johnny would, then I would. I have some old tapes — they are hilarious!”

The general sentiment is that everyone seems eager to recapture some of the magic felt between the band, staff and fans.

Mr. Camp says, “I do believe once we get back on stage and see everyone ready to party, it’ll all come back.”

“People are talking about it all over town,” Mr. Sullivan says. “It’s looking like it’s going to be a good time.”

The party is set for Heritage Hall at the Cool Insuring Arena on Saturday, May 16 at 6 p.m. Cost: $10, be available soon.