Denver Grover, the chef who lost her job when owner Rich Schermerhorn closed The Aviator Restaurant at Warren County Airport in January, plans to buy the UpRiver Cafe in Lake Luzerne.

For the 2020 season, which starts in April, Mr. Van Bourgondien said, “We’re gonna partner together in the business, with Denver taking it over after that.”

Ms. Grover, who said the project will also involve her boyfriend Martin Semon, said, “Andy and Betsy are…being very generous and gracious helping us out by opening the restaurant on ‘their dime’…so that we can take over the restaurant when we get all our financing.”

“We’ve known each other through the years,” said Ms. Grover.

“Denver and I worked together at the Sagamore about 20 years ago” where he was the pastry chef, Mr. Van Bourgondien noted.

Ms. Brandt added, “Denver helped us out 10 years ago” when the couple opened UpRiver Cafe.

It was Ms. Brandt who saw in The Chronicle that The Aviator had closed and that Ms. Grover was seeking a new opportunity. Ms. Brandt phoned her husband.

“Betsy read it to me,” Mr. Van Bourgondien says. “Then in two minutes I e-mailed Denver. Ten minutes later she called me back.”

Ms. Grover says, “I knew I’d be going in a different direction. It’s a turning point for me.”

She said she’d long thought of owning her own restaurant. “I tried before” — “a little breakfast, lunch place” at the Kingsbury General Store — “but it didn’t work out.”

“We think we could be a good fit,” says Ms. Brandt. 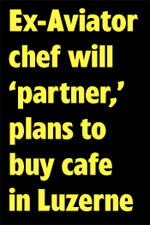 “Especially with his guidance for being here so long,” says Ms. Grover.

She adds, It’s “also a great benefit to us that they…can introduce us to their patrons and we will definitely have some people following us to Upriver from our time at the Aviator.”

Mr. Van Bourgondien said he and Ms. Grover will combine efforts on this year’s menu. “We’ll still keep some of the [UpRiver] favorites, we’ll have some of the favorites from The Aviator. Together we’ll create our own signature stuff.”

Ms. Grover said, “You’ll see a lot of specials in the future, seeing what will work.”

Mr. Van Bourgondien noted, “We get a lot of people who are here for the season. They’ll call to find out the specials. They want to know what’s new.”

He said UpRiver Cafe will open for the season “the last week in April. It coincides with Maple Fest. Easter’s a little bit too early this year.”

The restaurant operates from late April through the end of October. In June, July and August, it’s open every day but Tuesday, serving lunch and dinner.

He led the way to the kitchen, pointing to a corner where the tile flooring had been removed to make way for an extensive repair he didn’t have time to make during the season.

He estimates it would have cost $1,500 if he hired the job out. “So you do most of the stuff yourself. That’s the only way you can make money in this business.”

He said Ms. Grover’s boyfriend Mr. Semon has that do-it-yourself ability too.

Ms. Grover said she also hopes to bring aboard Jenn Nichols, her Aviator sous chef. “The others [from her Aviator staff] have pretty much found jobs,” she said.

In 2019, Mr. Van Bourgondien lengthened the dining deck overlooking the river. This year he said he intends to install “a romantic patio” down the hill.

Posing for a photo on the deck with the pristine Hudson River view, Ms. Grover added, “You can’t beat the spot.”