Revolution Rail concludes its rail bike season in North Creek on Oct. 31, very happy with how the business has done in its fifth year. (A few rail bike spots were still available for Halloween weekend at last look.) 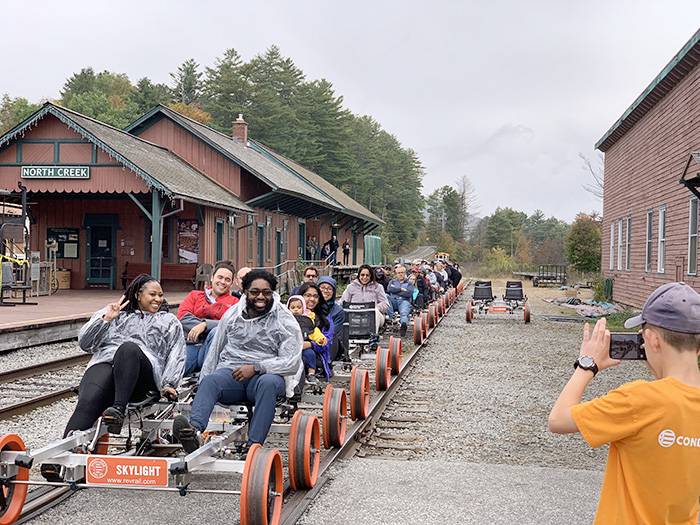 “It’s been great,” owner and co-founder Michael Dupee told The Chronicle in a phone interview. “They’re very successful. We’ve got two different runs here in North Creek; we opened the second one last year for the full season. And those have both gone well.

“We opened an additional run in Hadley-Lake Luzerne right around Memorial Day, we ran weekends there, and we’re hoping to expand that next year.”

How many people have ridden this year? “We don’t have the exact number handy right now, but it’s probably well over 30,000,” said Mr. Dupee.

They also have locations in New Jersey and Colorado.

Asked why rail biking has caught on, Mr. Dupee said, “It’s fun, outside exercise. You get to get out into the woods as though you’re hiking but you’re not hiking. It’s a novel activity. It’s a little easier for folks.”

He adds, “You’re seeing parts of the Adirondacks that were previously really just open for freight train traffic.”

Prices start at $80 and can be done on two-person “double” or four-person “quad” rail bikes. The trip is 6 to 7.5 miles and lasts about two hours in total.

The seated bikers pedal down train tracks. At the halfway point, staff turn the bikes around and riders pedal back to the start.

“We pay for access to whoever owns the railroad,” Mr. Dupee said.

Mr. Moore added, “For six months in 2021, they paid us $6,000 for usage of the Hadley Station and Thurman Station…Whether that piece extends into subsequent years is TBD. We wanted to see how it worked this year before we addressed future years.”