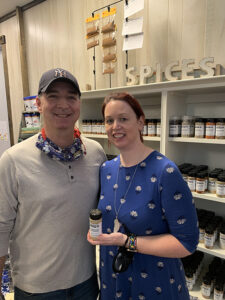 “On Christmas Eve, she used my ‘loaded salt and pepper’ subtly in a frittata on her Rachael Ray Show,” says Rachel Dutra, who operates Rachel’s Spice Company on Warren Street, with her husband Dave Dutra.

Mrs. Dutra said she had no idea Ms. Ray had featured her product. Then her website blew up. At first, she panicked.

“I couldn’t figure out what the heck was going on.” She worried that “maybe they were all Christmas orders that I never got or something. We got 13 orders in 10 minutes, and I haven’t gotten 13 orders all year. So I literally thought something was wrong.”

A customer email alerted her to what had happened. Now Mrs. Dutra calls it the “Best Christmas present ever.”

Ms. Ray featured the Rachel’s Spice product again on Monday — “except this time,” says Mrs. Dutra, “she literally held the bottle in her hand and was like, ‘I’m going to be lazy about this because I really want to give a good shout-out to this product. Rachel’s Spice Company.’”

That triggered a new wave of orders.

“I think we did 45 orders from the first episode…And this last one I think we beat that. They’re still rolling in right now,” says Mrs. Dutra.

She said she rarely gets online orders. “For the past two years, I was just trying to keep the cafe afloat, which has taken all of my energy.”

Now they’re shipping across the country and internationally to Edmonton, Canada.

All 3 are Lake George grads

Mrs. Dutra says, “She’s just a girl from Lake George just like me. And she worked for it. And she got there. And she shared that with me. And that to me is just amazing. It feels like we all live here.”

Mrs. Dutra says her “loaded salt and pepper” is “an amazing product. But it’s not a glamorous product. It’s literally salt, onion, garlic, and white pepper, so [it’s a] workhorse. It’s one you put on your table and you put it on everything and you don’t really think about it.”

“It was really cool for her to pick something like that…It’s not my fancy burger seasoning. It was like a legit ‘somebody’s going to use this every day.’”

Mrs. Dutra says Ms. Ray “said on the show this past Monday she’d received it as a gift. I don’t know what’s cooler. The fact that Rachael Ray actually used my seasoning on her show, or somebody thought my seasoning was worthy to give legit a celebrity.”

The boost comes after a difficult few years. “I don’t even know if I can verbalize what it did for me,” Mrs. Dutra said.

“We had only been open for just over a year when everything went down [due to Covid]…We did not shut down. We just kept reinventing the wheel and it’s been an exhausting, draining, depressing two years.”

Mrs. Dutra said they were “at a crossroads” as to the future of the business. “We talked a lot about where are we going to go…Is this what we should be doing?”

Now she has restocked her spices and is looking forward. She hopes to eventually have a stand-alone spice and tea shop, and she’s planning a Youtube show.

Share
Previous Castelli: Rep. Elise Stefanik has ‘treasonous spirit’ of ‘traitor Benedict Arnold’
Next Marijuana: Who’s in, who opted out of sale, on-site use