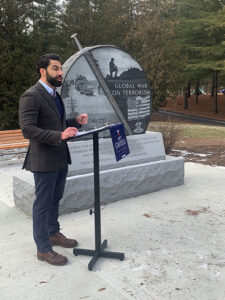 Speaking in Crandall Park on the Jan. 6 one-year anniversary of what he called the “insurrection” at the Capitol in Washington, D.C. that he called the “greatest threat to our democracy since the Civil War,” Democrat Matt Castelli said “Congresswoman Elise Stefanik violated her oath to the Constitution that day, and has continued to do so since.”

“Her actions remind me of another individual with ties to the North Country, an individual whose success in battle at Fort Ticonderoga, Valcour Island and Saratoga inspired hope in the future of this military officer’s role in the new republic, not unlike the hope we once had for Elise Stefanik.

“But those hopes were dashed when his lust for power and recognition led him to betray America. I’m talking about the traitor Benedict Arnold, and his treasonous spirit is alive and well in Congresswoman Stefanik.”

Speaking of the events of Jan. 6, 2021, Mr. Castelli said Rep. Elise Stefanik violated her oath to the Constitution that day, and has continued to do so since.

“She defied the Constitution and the will of the American people by refusing to certify the Electoral College count.

“She promoted the same Big Lie falsehoods that she was fed by the former president’s inner circle to keep Donald Trump in power, despite him losing a free and fair election.

“And since that day, she has tried to thwart attempts to investigate what happened on January 6 at every turn.

“She voted against a bipartisan independent investigation of the attack. She led the effort to oust Liz Cheney, and on the same day that police officers testified about the brutality that they endured.”

Beyond seeking to defeat Rep. Stefanik on Election Day, Mr. Castelli wants to disqualify her from even running.

“Today, I’m calling for legislation to bar from office anyone who engages in insurrection against our democracy after taking an oath to the Constitution,” said Mr. Castelli.

“Specifically, I’m calling for an enabling statute for Section Three of the 14th amendment….[that] declares that officials who swore an oath to defend the Constitution, and then shall have engaged in insurrection or rebellion against the United States are ineligible to serve in office, but we need a statute that allows us to enforce it.

“That’s why I intend to co-sponsor HR 1405, legislation that would create a civil procedure, allowing us to enforce this provision of the 14th amendment and remove and disqualify from office anyone who violates their Constitutional oath including sitting members of Congress.

“Critically, this bill will answer many of the questions Americans have about January 6 to this day.

“First, it defines what constitutes an insurrection or rebellion under section three.

“Second, it establishes that the Attorney General and Department of Justice are those responsible for enforcing section three, instead of relying on hyper partisan Congress to police itself.

“Third, it calls for a three-judge panel from the U.S. District Court for D.C. to judge whether an individual engaged in insurrection or rebellion, using a clear and convincing standard of evidence.

“And fourth, and finally, the bill would empower this three-judge panel to issue penalties that include removing individuals from office, disqualifying them from future office and stripping them of government benefits such as a pension.”

Mr. Castelli said, “This legislation reaffirms that eligibility for federal office depends on an allegiance to the United States, and that those who abandon their oath to the Constitution should be removed from and disqualified from office, and that we will not allow for continued insurrection from these individuals, when the will of the people doesn’t go their way.”

“I take this personally,” said Mr. Castelli. “I understand the weight of the oath because it’s the oath that I took 16 years ago when I first joined the CIA. And it’s the same oath that each member of Congress takes that those who serve in our military take, to support and defend the Constitution against all enemies, foreign and domestic. That oath binds our allegiance to the United States, not to a political party, not to a president, but to the Constitution that establishes our government of by and for the people.

Stefanik: Castelli was part of ‘coup’ attempt to ‘overthrow’ Trump

“Downstate Far-Left Democrat Matt Castelli launched his campaign by disgracefully comparing January 6th to 9/11 during the week of the 20th anniversary of the terrorist attacks.

“He obviously knows Benedict Arnold well as Castelli is widely known to have been involved in the illegal coup as a member of Obama’s national security staff under Susan Rice who stayed for the transition to attempt to overthrow President Trump.”

Referring to last week’s Jan. 6 protest in downtown Glens Falls, Mr. DeGrasse said Mr. Castelli “participated in an event that called for killing Americans who stood up for constitutional issues regarding the election.” It said speaker Larry Fine called 2020 Capitol invasion “treason” and “a consequence of treason is death.”

“On January 6, 2021, I strongly and clearly condemned the violence and destruction that occurred at the U.S. Capitol — just as I strongly condemned the entire year of violence and lawlessness that raged across our nation throughout 2020. Our nation owes a debt of gratitude to the U.S. Capitol Police for their bravery and heroism on that day and to those who sacrifice and serve in law enforcement every day across the country.

“It is unacceptable that one year later the American people still do not have answers as to why the Capitol was left so vulnerable and how to ensure it never happens again.

“Rather than focusing on improving the security of the Capitol and adopting all the recommendations from the U.S. Capitol Police, Nancy Pelosi and House Democrats are instead using their illegitimate partisan sham of a committee to shred Constitutional precedent and punish their political opponents. It is unprecedented, and it is dangerous.

“The American people deserve to know that the ONLY office that is off limits to this investigation is the Speaker’s office. The Speaker of the House oversees the Sergeant at Arms who, at her direction, has refused to turn over documents and communications related to January 6th. The fact is that Nancy Pelosi bears responsibility as Speaker of the House for leaving the Capitol so vulnerable despite multiple warnings and requests, and now she is responsible for the cover-up of that fact.

“As I stated on the House Floor as the Representative for New York’s 21st Congressional District, I believe that the most precious foundation and the most sacred covenant of our Republic is the right to vote and the faith in the security of our nation’s free and fair elections.

“I swore an oath to protect and defend the U.S. Constitution, and I stand by my objection to the electors of certain states based on the unconstitutional overreach by unelected state officials and judges ignoring state election laws. I am committed to working to strengthen our elections and rebuild that faith, so that our elections are free, fair, secure, safe, and most importantly, that they are according to the United States Constitution.”

The release quoted at length from Ms. Stefanik’s remarks last year on Jan. 6.

“The Representatives of the American people in this House are standing up for three fundamental American beliefs: the right to vote is sacred, that a representative has a duty to represent his or her constituents, and that the rule of law is a hallmark of our nation.”

“And in the spirit of healing, those are not my words, those are the words of you, Madam Speaker. From this very same Chamber, when some of my colleagues and friends across the aisle objected to the 2005 electoral college certification.

“So history is our guide that the People’s sacred House is the appropriate venue for a peaceful debate. And this peaceful debate serves as a powerful condemnati