It might not look it from the bevy of construction workers, building materials and rough edges seemingly everywhere, but owner Ed Moore and manager Tyler Herrick are sure the Queensbury Hotel’s $3.8-million expansion will be done in time for their planned ribbon cutting and community celebration on July 21.

Mr. Herrick actually expects construction to be done by the middle or end of June. “I’m very excited. It’s really going to bring the entire property together, and after 6-plus years of renovations and major projects we will have the opportunity to settle in a little.”

Mr. Moore bought the hotel in 2016. A Staten Island native, he first developed the French Mountain Commons outlet center in Queensbury and also operates the Log Jam Outlets across the road.

“When all spaces are complete…max capacity for any single meal service period would be about 1,000 people,” Mr. Herrick said. “This would be in addition to our normal 200 covers for dinner in the restaurant spaces.” 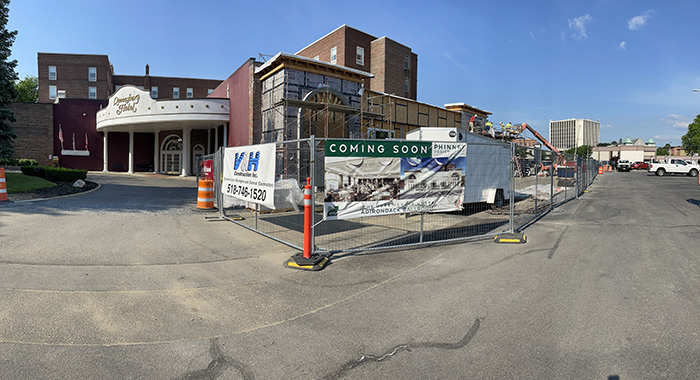 Nearing completion on the hotel’s north side is the Adirondack Ballroom that can be used as a single 5,700 square-foot space or divided into three rooms.

“When the three spaces are open,” said Mr. Herrick, “it’s the Adirondack Ballroom. Then we can break it up into the ADK East, ADK West, and the new space is ADK North. East and West will still be about 1,100 square feet each and then North will be about 3,500.”

A new “blast chiller,” still to come, will “quickly and properly cool prepped food for safe storage” and best taste, he said.

Capacity of the new ballroom ranges from 425-450 people for a plated dinner with minimal AV setup, to around 350-375 for a normal wedding with a sizeable dance floor. “For a trade show or cocktail party with limited seating we will be able to do 700+,” Mr. Herrick said.

“Pre-pandemic on some busy event weekends we would do 600–700 banquet dinners with events in the Ballroom, Gold Room, Warren, Adirondack and Albany Rooms,” said Mr. Herrick.

“Already on numerous weekends this fall we will have a large event in the new ballroom and then a 150-175 person wedding in the existing Ballroom/Gold Room.

“Our sales team is selling, and if there is an open room they are pushing hard to fill all the rooms every day.”

Mr. Herrick said the Q has 94 employees. “If we were fully staffed now we would have another 10 bodies or so…We have 11 bodies in the kitchen now (excluding dishwashers). When fully running we expect to add at least 3-4 more bodies just from a culinary standpoint. Front of house servers etc, are about 35 now, with plans to add at least 5-10 more.”

How many people are working on the construction? Between the general contractor V&H Construction crew and subs, Mr. Herrick said there are about 15-20 contractors on site every day.

Phinney Design did the design work.

“As of Friday they were painting, installing light fixtures, and installing the new HVAC units on the roof,” Mr. Herrick said. “This week we are starting the kitchen equipment install and sheetrocking the last hallway outside the Warren Room.”

Tuesday morning they were deciding on final shades of grey to paint the walls.

The renovated Warren Room will serve as pre-space for weddings, banquets or gatherings, and still be a presentation room on its own.

The Saratoga and Washington Rooms across from the Warren Room have been transformed into open, pre-event gathering space that will flow from the new hallway and bathrooms created previously across from the pool.

New Washington and Saratoga Rooms have ‘moved’ upstairs, off the second floor mezzanine, in renovated guest suites now equipped for small events such as a bridal dressing party or even a Fantasy Football league meetup, Mr. Herrick suggested.

The Adirondack Ballroom will have an outdoor patio area as well.

The Hotel plans to add a theater-style marquee entry canopy over the Ridge Street hotel entrance, leading guests directly to the front desk, Mr. Herrick notes. He points to heavy grommets in the wall where such a feature previously existed when the hotel opened in 1926.

They aim also to install a “blade” style sign (like Davidson’s Restaurant has) on the Ridge and Maple Street corner of the Hotel. That idea they first floated in 2016, Mr. Herrick said.