Puppy Bowl, on TV before the Super Bowl, was recorded in GF at Cool Arena 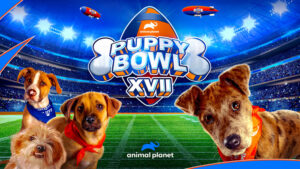 Animal Planet’s 17th annual “Puppy Bowl” was filmed away from New York City for the first time ever, due to Covid. It took over the Cool Insuring Arena here in Glens Falls for 10 days last October.

Puppies provided by animal shelters from around the Northeast battle it out as “Team Ruff” and “Team Fluff.”

The dogs score points for their “teams” when, in the course of playing with dog toys strewn on a dog-scaled football field, they happen to pick one up and carry it by mouth or kick it into the end zone.

The goal in the 10 days of filming is to shoot enough footage to create a dramatic football storyline in post-production.

All the dogs featured on the field have since been adopted, Erin Wanner, vice president of production for Animal Planet, told The Chronicle, but others shown during “Pup Close” breaks will be available.

A boon last October for downtown

“We loved Glens Falls,” Ms. Wanner said. “What a wonderful city you have.”

“It was such a relief to be somewhere where the Covid was not so bad and you could move around,” she said.

The Puppy Bowl packed a lot of punch locally: 70 puppies in town; 210 production Animal Planet staff members here over 10 days, 145 at a time; 700+ room-nights rented at the Queensbury Hotel; seven restaurants providing catered lunches and many others serving staff members who also dined out for dinner.

The Puppy Bowl typically shoots at a sound stage in New York City, but because of Covid restrictions last fall, “it just could not happen,” Ms. Wanner said.

“We had the idea to shoot it at a sports arena somewhere, for a stadium-in-a-stadium feel.”

Chad Rabinovitz, the (soon to depart) Adirondack Theatre Festival director, told a friend on the Puppy Bowl production team about Glens Falls — and he wound up serving as the location manager.

“Glens Falls had everything we needed,” Ms. Wanner said. “The Queensbury Hotel was attractive for its capacity and it has wonderful Covid protocols, and they are dog-friendly.”

Ms. Wanner especially loved “that sushi place,” The Mikado, and other company members raved about Morgan and Co.

“Everyone loved both Spot Coffee and Spektor Coffee Roasters,” she added.

“We would love to” shoot again in Glens Falls,” Ms. Wanner said. “We just have to figure if we are going to be back in New York City next year. I really liked doing the stadium within a stadium look.”

Share
Previous If not Indians, what nickname for GF High? Mark: ‘Pulpers’ or ‘Big Boom’
Next Didn’t just make an ice rink; he built his own Zamboni!