Didn’t just make an ice rink; he built his own Zamboni!

Dustin Underwood didn’t just build an ice rink in the backyard of his Queensbury home in the Herald Square neighborhood. 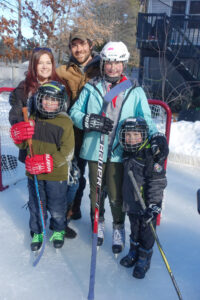 He also custom-built his own Zamboni machine out of spare parts to make the ice surface clear and smooth.

Dustin, a mechanic for the Town of Moreau, says of his “contraption: The key components are a snowblower frame, a truck running board, a large sign hanger which the drag cloth and running boards are attached to, some old lawn mower blades for fill-in metal — pretty much whatever I could find and piece together for free….I do also have about $10 in PVC piping/fittings.”

The rink involves the whole family — Dustin and his wife Ashley Heinz Underwood, who maintain it, and their children Emilee, 13, Brayden, 8, and Dalton, 6, who play hockey on it incessantly.

“It’s a lot of work but they spend so much time out here,” says Ashley. “No matter the weather, as long as it’s not raining, they’re out here.”

“I think there’s more people doing it this year than ever,” Dustin notes, not only because people are home more due to the pandemic but also “you never know if the Youth Hockey will get shut down. You want to have something for the kids to do.”

Dustin says he’s constantly learning “how to make the ice better and harder.” 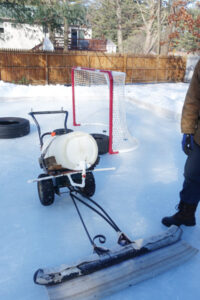 “I did a lot of reading online” and he’s always “talking to other parents with rinks.”

Key: Use warm water in Zamboni

One key is he discovered is to use warm water in the Zamboni when surfacing the ice. “With the warm water it doesn’t really chunk away,” he says.

“I run five-gallon buckets out of the bathtub” to fill the Zamboni’s 15-gallon drum.

Dustin keeps tinkering. He said he “punched more holes” in the flow pipe “to make more water come out” and added a chain “for weight. It holds the water better.”

“My wife, she’s a major contributor to keeping it going,” Dustin hastens to add, especially on nights of snowstorms when he has to go plow for the Town of Moreau.

“It’s crucial to get the snow off the ice as soon as possible before it bonds to the ice,” says Dustin. “She does much of the snow removal throughout storms. The driveway is always done and the rink has usually been done at least once [by Ashley].

“That is an enormous help and contribution to the rink and keeping good ice.” 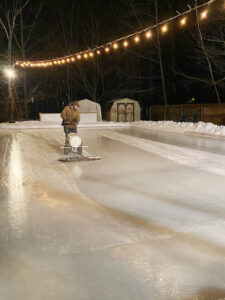 Ashley, whose day job is being an account representative at StoredTech, says, “It’s definitely a team effort, especially with winters like this!”

“Typically,” she says, “I — and sometimes the kiddos — shovel any fresh snow off of the rink as quick as possible. As soon as snow fuses to the ice it can be a real pain to smooth out again.

“We both spend a lot of time flooding it, especially early in the season and in-between using the Zamboni.

“We tweak it every year trying to figure out how to make things more efficient, but there’s really no getting out of late, cold nights if you want a good solid rink!”

Dustin says that the first year the rink “was no bigger than the small above-ground pool” next to the house. It had no liner, and the sides were “just snowbanks.”

Year by year “I went a little bigger.” His first rink liner was “a couple sheets of plastic.”

This winter brought major improvements. “For my first-ever actual border this year,” says Dustin. “I called Mead’s Lumber and had 1x12x12 boards cut.”

Last summer he says his “very good work friend” Tom Olsen clued him into “an old ice rink someone had in their backyard,” from which “I acquired two of the three tarps I’m using as a liner.”

Dustin says, “Definitely the border and a liner make it a whole lot easier” to maintain the ice even when the weather warms.

He says his friend Tom “also helped out again for the netting currently protecting our siding from flying pucks, by donating an old pool leaf cover.”

“It makes it worth it,” Dustin says. “The kids come out and get the use out of it.”

“It’s our winter wonderland,” adds Ashley. “Got to have something in the winter to make it go by.”

Share
Previous Puppy Bowl, on TV before the Super Bowl, was recorded in GF at Cool Arena
Next Our February 11 front page