Shock-metal hard-edged scare-rock on tour: Who wore it best — Alice Cooper last Thursday, Nov. 21, at the Cool Insuring Arena? Or Swedish frontman Tobias Forge and Ghost, at the Cool Arena about a month prior, on October 26?

Cooper is the real deal, a pioneer of shock rock in the 1970s, truly a breaker of boundaries whose lyrics when new had to have scared the hairs right off listeners’ arms. Even his love songs referenced sadomasochistic impulse, if not practice.

That’s less shocking now than when it originated 40 or 50 years ago. The raw rebellion underneath “School’s Out” has long since been eclipsed by rabid punk and disgruntled grunge. Now even mainstream pop can aspire to bold, righteous anger.

We live in interesting times, a world of screaming matches on the streets and mosh pits in the arena. Neither fresh nor decrepit, venerated while he’s also still aiming to kick us in the sternum — Alice Cooper and his killer 50-year-act holds some place in that context. I’m still trying to figure out what place that is.

It’s still satisfying when Cooper simulates his own death by oversize guillotine, or roars his “Feed My Frankenstein” lyrics while a 12-foot monster puppet lurches around the stage — but is it eye-opening or shocking, or is it “camp?”

It is such a context — been there, seen that, watched Ozzy bite a bat (or heard about it, anyway) — which Tobias Forge and Ghost understand and manipulate in their road show. There, every element is massive, larger than life, from the scale of the confetti drop to the rage of the stage-side fire flares and the rafter-shaking boom of sonic cannons.

It’s not meant to be funny but it is post-Modern, post-anger, post-something.

That something is, arguably if not exactly, Alice Cooper.

Cooper’s castle set: Impressive but not mind-blowing. His giant dancing inflated baby, the 12-foot looming Frankenstein, the dancing young bride in bloodied dress — they are all played in concert as if they are in themselves shocking, raw, groundbreaking. They are nuts, true, and cool, in theory. I’m trying to understand how it plays, so many decades later.

I wonder how many crossover audience members had also seen Ghost’s sparkling and elaborate set, the blazing heat-throwing torches of fire, the sonic booms that had some of us jumping from our skin, the blinding confetti shower that — frankly — made the Cooper roadshow’s similar spew (from a skull-headed catapult contraption that otherwise sat idly by the side of the stage) made that seem, well, cute by comparison.

Tobias sneered in a high-pitched voice that he meant to scare or unnerve us — even while what he was mostly doing was charming us.

Alice Cooper was all business — bad business in the best way — roaring one hard-pitched hit after another in his leathery voice, never stopping to address the audience until he introduced the band just before the finale.

Nearly from start to finish, Cooper and company whipped the Cool Insuring Arena into a raucous frenzy. “School’s Out” had 10 year olds to grey-hairs screaming together in rebellion. When he mashed it with Pink Floyd’s anthem “We don’t need no education…” from The Wall — he drew his own sonic boom of sing-along pandemonium.

His music is big, exciting and loud, but how do we take it when he’s 71 and still chanting “School’s Out For Summer,” or “I’m Eighteen” (and confused about life)? It’s a little weird.

The mostly older but notably all-ages audience is still going nuts over it. So, snarling out the angry angst, seems to be working just fine. Although his full playlist also includes such soft-hearted ballads as “Only Women Bleed” and “You and Me,” on this tour Cooper is absolutely “No More Mister Nice Guy.” Those softies were nowhere to be heard.

Many of the songs were accompanied by a menacing prop — rag-wrapped old crutch, horsewhip, sabre and foil, a Musketeer-inspired sword, even black maracas. Is that cool, or hackneyed?

He threatens a baby doll pulled from Victorian pram as if we might actually believe there was potential for evil afoot.

35 years after the Stay-Puft Marshmallow monster of Ghostbusters, Cooper’s giant, inflated, avenging baby in swaddles — even one that is scarred and channeling the evil eyes of horror film icon Chucky, and even one that is lumbering on stage whilst swinging the supposed guillotined head of Alice Cooper himself — it is wild, raucous, funny, and, okay. A good time. 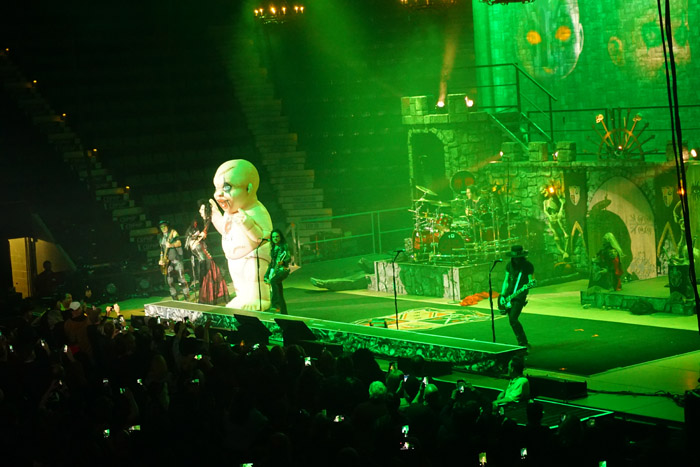 The only thing that truly creeped this viewer out was when Cooper smooched the bloodied young dancing bride in the show, full and on the lips.

He’s touring with three guitars, one bass guitar and a drum kit — nothing else: No keyboards, no horns (except once when Cooper himself trilled a few strains on harmonica). The effect is kind of raucous, a lot of showy theatrics and serious chops from those gunslinging guitars at the front of the stage.

My favorite was Nita Strauss; I’d be interested to catch her solo act if that exists. Drummer Glen Sobel is a master, his long solo a highlight. All of the musicians earned the audience’s elation on solos.

Interestingly, he and Sheryl were a friendly presence here in town, we heard, dining at The Log Jam, and interacting pleasantly with staff at the hotel where they stayed the night prior to the show.

On stage, Cooper and his band all played rough to the roaring, appreciative audience. I’d estimate there were probably about 2,500 people there, a perfectly respectable crowd though I was surprised it wasn’t more packed or even completely sold out, such a big-name act.