No more Drum Corps at East; Chris Reed: ‘I can’t afford it’

Chris Reed, Jr., who revived Drum Corps International shows at East Field in Glens Falls successfully in 2018 but disastrously in 2019, said he does not intend to present it this year.

The show in 2018 did well, Mr. Reed reported, but heavy rains last year on the day of the event — Monday, July 22 — led to its cancellation. 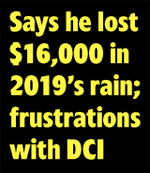 Not having purchased event insurance, Mr. Reed says he lost about $16,000.

He expressed frustration to The Chronicle on several points.

He said that, early on the day of the event, with heavy rain forecast, he secured an alternate location at the Cool Insuring Arena in Glens Falls.

But Mr. Reed says the Drum Corps International representative would not agree to a change in venue before 5 p.m., too late for the arena to staff a 7 p.m. show.

The Chronicle reached out to DCI but was told, “our Exec Director…would like to hold all comments at this time.

Mr. Reed, in a letter to DCI, wrote that an hour before show time, the participating Corps directors expressed extreme reluctance to have their young performers take the field, even for a pared-down show.

According to his letter to DCI, and in a conversation with The Chronicle, Mr. Reed says he then agreed to cancel the event.

The show had been advertised as taking place rain or shine.

Mr. Reed first announced that no ticket refunds would be offered. He reversed that decision the next day.

“No way,” Mr. Reed says he responded. “I can’t afford to put myself or my business back at risk.”

As to the future of Drum Corps in Glens Falls, Mr. Reed says, “If it is going to come back, it should be an organization doing it, not one person. It’s too much.”

The Lions Club of Fort Edward for many years brought Drum Corps International to East Field. Mr. Reed revived the event in 2018 after a nearly 10-year hiatus.

Besides the cash loss, Mr. Reed said he found it extremely difficult both years to secure appropriate housing and practice space for the drum corps, among other challenges of doing such a large event as a small business and mostly solo organizer.