Joseph Girard III, a fourth-grader at Sanford Street School, won the state Elks Hoop Shoot foul-shooting title among boys ages 10 and 11, and will compete in the national semifinals in Wilkes-Barre, Pa., on March 26. 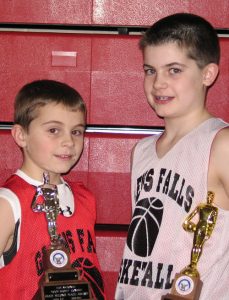 Joseph, 10, the son of Arleen Girard of Queensbury and Joe Girard, Jr., of Hudson Falls, made 22 of 25 foul shots to win the state crown. He also won the award for most consecutive shots made (15).

Joseph’s second cousin, 9-year-old Trenton Girard, finished second in the state among 8- and 9-year-old boys. He made 19 of 25 foul shots in the state finals. Trenton attends Abraham Wing School and is the son of Tiffany and Robert Girard.

Joseph Girard III said he’s been playing basketball since he was four. It’s his favorite sport “because my dad played on Coach [John] Beilein’s team at LeMoyne and now Coach Beilein is the coach at Michigan, and I’ve seen a couple of their games.”

What about Jimmer Fredette?

“He’s up there,” Joseph said, smiling.

He said he has seen video of his dad when he played at St. Mary’s Academy and then Shenendehowa. He said his dad “always tells me if you’re not practicing, you’re not going to be as good as you can be.”

Joe Girard Jr. said his son “thoroughly enjoys basketball. We have to tell him to stop. He loves it. And he’s not playing for Daddy or Poppie, he’s playing for himself.” 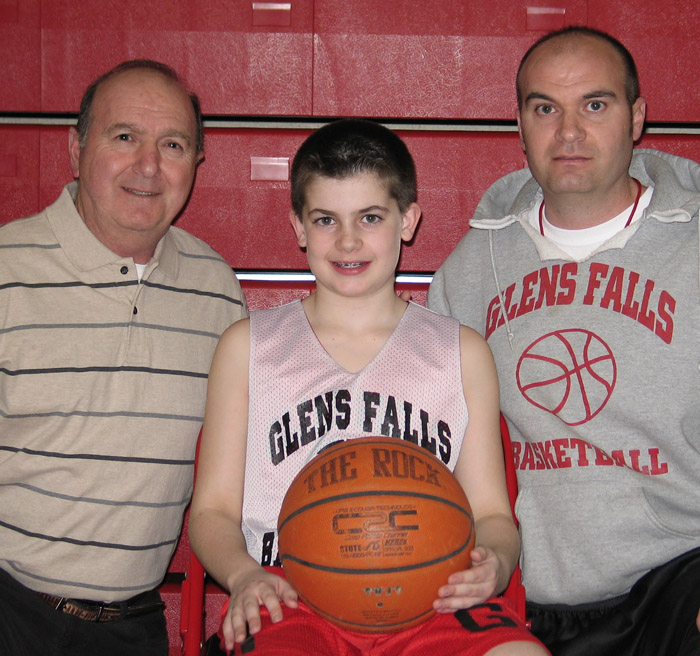 Joseph Girard III with his grandfather, Joe “JoJo” Girard, left, and his father, Joe Girard, Jr., both former basketball standouts at St. Mary’s Academy. Joseph, 10, assessed his Dad’s game as “pretty good,” and said his grandfather sometimes officiates his games “but he calls a lot of fouls.”
Chronicle photos/Gordon Woodworth

Grandfather Joe was a standout three-sport athlete and sharpshooting guard at St. Mary’s before coaching at his alma mater for many years. He keeps the scorebook or officiates many of his grandson’s games.

Joe says of his grandson, “he’s Joseph, not JoJo, not Joe Jr. He’s Joseph. He loves going to the gym, and he takes after his father. When it’s time to play, he perks right up. The only thing I tell him is he has to be an athlete, not just a basketball player. He loves football and baseball, too.

“He made the fourth-grade AAU team as a third-grader, and does some amazing things for a kid his age. I don’t take any credit…it’s all his father. And he’s ahead of Joe at this age, because Joe didn’t have AAU to play when he was 10. I love watching him play.”

Asked about following in the footsteps of his father and grandfather, Joseph said, “I can’t wait until I have a son to coach!”

And yes, he said, he would name his son Joe. — Gordon Woodworth