As a senior at South High, Morgan kicked extra points on the football team,l and she says she’s kicked 40-yard field goals in practice.

At Franklin Pierce, “I played soccer as a freshman, but I missed football more,” she told The Chronicle. “I really missed the camaraderie of the team. The guys at South High were really welcoming and accepting, and the guys at Franklin Pierce are, too. Some of them encouraged me to try out…Practice is going really well!”

“I saw that they didn’t really have a kicker, so I e-mailed the coach in May, and he asked me to come try out. I went over and kicked for him, and he was impressed.”

First-year head coach Russell Gaskamp told The Chronicle Morgan is doing “very, very well. The guys on the team have really embraced her. She has worked very hard. She’s the first player on the field every morning, she’s very receptive to coaching, and we had live kicking practice today with a full rush and she did a great job, which will build her confidence.

“She’ll be on the team this fall, and I’m hoping she can kick for us. She doesn’t have the overall leg strength for kickoffs, but she is competing for the placekicking job. As long as she gets the ball in the air quickly and puts it through the uprights, she’ll be fine.” 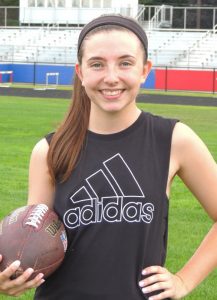 (Coach Gaskamp, by the way, was an offensive lineman for the University of Texas when star running back Rickey Williams was playing.)

Morgan says, “I’m really excited. There aren’t a lot of expectations on us, so we want to show people what we can do. And it will be nice to show other girls that they can play, too.”

She said she loves that football “is a real-ly intense game. It takes a lot of precision. I’m ready for the pressure.”

The daughter of Kris and Missy Smith, Morgan “has always been very driven,” her dad said. “She’s always up for a challenge.”

Academically, she made the Dean’s List both semesters as a freshman, and is technically a junior because she accumulated so many college credits at South High. She says she’s definitely going to continue her education beyond Franklin Pierce, perhaps in law school.

Franklin Pierce, in Rindge, New Hampshire, is moving up to Division II this season, and will play in the NE-10 against schools like Assumption, Stonehill, Bentley and Saint Anselm. The Ravens’ first game is Saturday, Sept. 7, at home against Wesley.

Share
Previous Cathy: Aurora in GF was missed opportunity
Next Our September 5 issue