I’m sorry that Glens Falls didn’t entirely roll out the red carpet for Olympic icon Jackie Joyner-Kersee. Considered one of the great athletes of all time, she won six Olympic medals in heptathlon and long jump, including three golds competing at four Olympic Games. 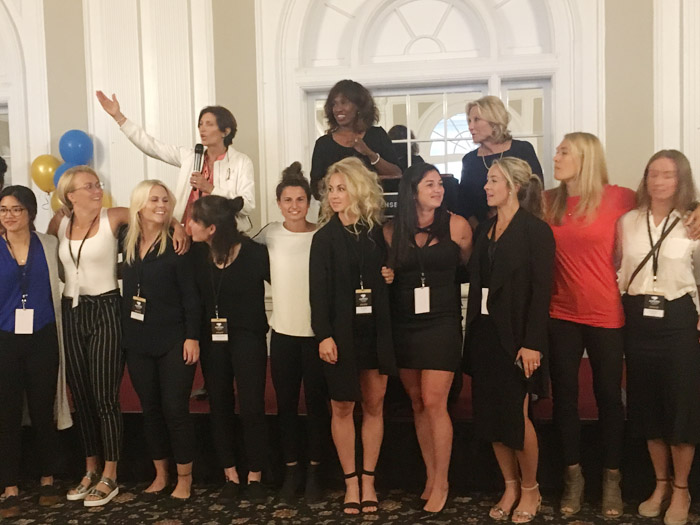 Turnout was not as robust as one might hope for the caliber of athletes in the room. It is hard to get into people’s consciousness with a new event.

In this case, a new concept, too. The point of the Aurora Games, as it was explained to me, was as much about “changing the game” — encouraging and empowering female athletes — as about entertaining spectators or having one team come out the winner.

For the reception at the Queensbury Hotel, State Senator Betty Little was there (she nearly always is!) — but she wasn’t recognized from the podium or, so far as I could tell, offered opportunity to speak.

If other elected officials — the mayor of Glens Falls, Common Council members, others — were there, they didn’t make themselves known. And where were other leaders (female or male), members of Zonta or Soroptimist women’s service clubs, school cross country or swim team members — who else?

Missed opportunity, in my view, to welcome Ms. Joyner-Kersee and the others, all who have helped efforts on behalf of young athletes and young women.

Hockey’s Ms. Murphy spontaneously took over emcee duties. She invited her fellow featured athletes to speak, and she asked to come forward the young women hockey players in attendance.

“Look at them, they are athletes, also look like models, if anyone wants to hire them,” Ms. Murphy extolled. Also, she urged: “Buy tickets to the game, even if you’re not gonna come. We need your support for this to succeed!”

Their message was about empowerment, not only athletic achievement. Ms. deVarona noted that the vast majority of leading women CEOs participated in sports while growing up.

Aurora Games in GF: What drew, what didn’t

Last week’s first-ever Aurora Games for women’s athletic empowerment was based in Albany for the week. It branched into Glens Falls on Wednesday and Thursday, Aug. 21 and 22.

There was women’s hockey plus a hockey clinic at the Cool Insuring Arena (CIA), and a luncheon and a reception at the Queensbury Hotel headlined by Olympic track great Jackie Joyner-Kersee.

We asked Tyler Herrick, general manager of the Queensbury Hotel, which was sort of ground-central, how things went.

Thursday night’s hockey game drew about 700 people as world- and Olympic-level players vied as “The Americas” vs. “The World.”

“Naturally we hoped for more, but the last week pick-up was great,” Mr. Herrick said.

“The highlight of the week for me was the youth sports luncheon at The Q on Wednesday,” attended by 130 people, including 80 youth sports players — mostly girls.

“During this event the hockey Olympians split up and ate with the different teams, and then representatives from both the Worlds and America’s teams got up on stage and shared their stories and did a quick Q&A for the local youth participants.”

“From a macro level the exposure that our region had was fantastic,” Mr. Herrick said. “All of the events in Albany were televised on ESPNU, which is currently in about 70 million households. During the Friday night televised game the announcers must have mentioned the City of Glens Falls, Lake George Region and Cool Insuring Arena 750+ times!”

They also showed highlights of the Glens Falls game and images of the City, Mr. Herrick said. “Overall I feel it was a big success. Yes, the Queensbury lost money but our mission is not only to be the leading hospitality solution in the region but more importantly it is to give back to the community that has supported us and enabled us to restore our City’s hotel back to its original grandeur.”

Mr. Herrick said, “If one local youth that attended the luncheon was inspired to take stay on the right track and become the next female version of Jimmer or JG3 then who cares how much money it cost. It’s the right thing to do!”

The Aurora Games were planned for every two years. Mr. Herrick said, “We are extremely confident that the City, CIA and the Lake George Region will be a part of this in 2021 and beyond!” — Cathy DeDe