Max: On Covid, Europeans not saint, Americans not sinner 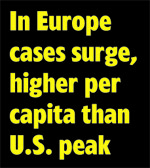 As Covid cases accelerated in the United States over the summer, a common refrain among Americans went, “Why can’t we be more like Europe!”

A viral graph (literally and figuratively…) showed European Covid cases dipping dramatically after the continent’s April peak, while American daily cases hovered around 20,000. This number would quadruple as the virus rampaged through the Sun Belt in June and July. Media reports juxtaposed shots of Europeans enjoying international vacations with hospitals overwhelmed in Scottsdale and Houston.

People eagerly pinned the differing rates of viral spread on everything from American individualism and ignorance to a lack of healthcare coverage and skepticism of science.

The friend who spent a week smoking weed in Amsterdam and returned enamored with bike lanes, public transport, and legalized prostitution hopped back on his pedestal: “You see! Europeans are sophisticated, they just get it. Americans don’t.”

Even Trump’s widely-respected former FDA chief Scott Gottlieb got caught up in the anti-American zeitgeist and prophesied a world with “a global Covid decoupling, where much of Europe and Asia is mostly able to keep epidemics at bay but the U.S. can’t, and sees higher and persistent infection and slower GDP growth.”

Yet as it turns out, Europeans are no more immune to socializing and failing to wear masks than Americans. Europe is now seeing rates of coronavirus spread that vastly exceed anything experienced by the U.S.

The most cases the U.S. ever recorded in a day was 76,000 on July 16. With a population of 328 million, that comes out to 232 cases per million. These European countries are recording vastly more cases than the U.S. has to date, and Europe may not yet be at its peak.

I’d guess that the virus spread among Americans in the summer because the heat in Arizona, Texas, and Florida forced people inside. There is nowhere on the entire European continent as hot as these three states, so naturally there wasn’t the same level of spread. But now that the moderate European summer is turning into a brisk autumn, people are moving inside and spreading the virus. Logically, the same will happen in the U.S.

But I’m no epidemiologist, so who cares. I’m more interested in using this case to look at “the grass is always greener” mentality with which so many of my friends returned to the U.S. after studying abroad in Europe. They believe Brussels, London and Barcelona have cracked the code to alleviating human suffering and attaining happiness. They are wrong, and the coronavirus proves it.

There is a lot that Europe gets right, including efficient public transportation, bike lanes and decriminalized prostitution.

But there is also a lot that it hasn’t solved or can’t fix, because Europeans —like Americans — are human beings, not saints. Consider the chart The Economist ran back in July. It showed that Americans were vastly more likely to wear masks than their oft-idealized Canadian, British and Scandinavian counterparts. It quickly deflates arguments that Americans are uniquely inconsiderate.

As the American and European covid trajectories began to diverge in April, anti-lockdown protests became another target of the “Europe is better” crowd, which argued that unlike Europeans, Americans were too obsessed with their “liberties” and notion of freedom to behave responsibly like their counterparts across the pond. This argument is bogus, too.

In August, over 38,000 people marched in Berlin to protest Covid restrictions. Over this past weekend, anti-lockdown protesters clashed with police in Ireland and the Czech Republic. In Prague, a classic spot for the American studier abroad, police tear gassed anti-mask protesters. Similar clashes have happened in idyllic Zurich,Madrid, and London.

Coronavirus is just the tip of this iceberg. Increasingly people talk about moving to Europe or Canada to escape Trumpism. They would be in for a rude awakening: right-wingers, conservative values and nationalism are not unique to the United States, and in many ways, are actually more prevalent elsewhere. Some nationalists in France, Scandinavia, and Germany make Trump supporters look like teddy bears.

Americans should stop projecting their visions of utopia onto Europe. If anyone needed proof that Europeans are not saints and Americans are not sinners, the coronavirus has provided it.

Editor’s note: Max Frost is president and co-owner of www.rocanews.com, a free website launched last month that features “Fast, casual news.” Max was a long-time foreign correspondent for The Chronicle; his parents are Chronicle owners Mark Frost and Sandra Hutchinson.