By Cathy DeDe, Chronicle Managing Editor
One theme throughout this week’s Chronicle arts section seems to …

One theme throughout this week’s Chronicle arts section seems to be good turnouts for events of all stripes.

The Battenkill Chorale continues that storyline. Late-arriving ticket-holders scrambled to find seats before the concert started last Sunday at Zankel Music Hall on the campus of Skidmore College. Others late-comers hoping to purchase tickets were turned away for lack of space.

The draw? A concert entitled On Hallowed Ground, a Plea for Peace. The brief program was bookended by two pieces, both composed in 1936 in Europe, by American Samuel Barber and Englishman Ralph Vaughan Williams.

The Barber is his nostalgic and evocative Adagio for Strings, long and slow, instrumental only. The piece pauses briefly after a sharp stop in the middle, then continues on to close with a lingering, nearly plaintive drop at the end, as if to wonder, what might happen? 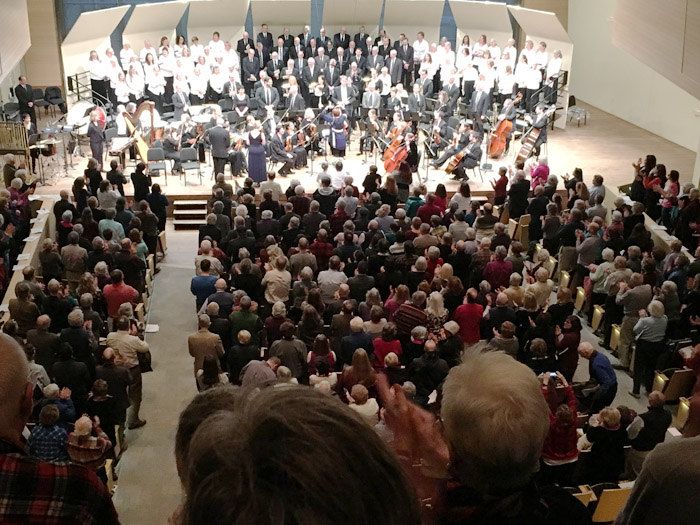 Single seats only — They were turning folks away at the Battenkill Chorale concert, Sunday afternoon in Zankel Hall at Skidmore College. Chronicle photo/Cathy DeDe

The Vaughan Williams piece, Dona Nobis Pacem, starts with several poems of Walt Whitman that were written in response to the Civil War. It ends with a litany of Biblical quotes on the subject of peace.

Whitman was an interesting man — a poet of the people, something of a Beatnik out of his time, I’d argue. He served as a nurse during the Civil War, with a first-hand view to the conflict’s vast destruction of life and limb.

The Vaughan Williams opens, after a prelude, with sounds that are well, bombastic, loud, solid. The first poem opens with a march: “Beat beat! drums! — Blow bugles! blow!”

The turning point is the more contemplative “Reconciliation” — set to a Whitman poem on the “beautiful” truth that words, time, death and nighttime will wash away the “carnage,” the poet writes, of war.

Soloist Keith Kibler portrayed it beautifully: Whitman’s words describe, quite graphically, a dead soldier laid white-faced in his coffin. The musical setting is quiet, understated. The words are powerful enough, underscored by a wash of sound from the chorus.

The title prayer — “Give us Peace,” in Latin “Dona Nobis Pacem,” wove beautifully throughout the piece in the voice of guest soprano Sylvia Stoner.

Between these two, the Chorale performed a setting of a traditional Civil War-era song, Walter Kittredge’s “Tenting on the Old Camp Ground,” with a solo by clear-voiced in-house tenor Paul Lambert.