The trips were part of an eight-month sabbatical that the couple — he a doctor, she a nurse — took to mark John’s 60th birthday.

After the cross-country trip, the couple rode another 12 days and 620 miles up the California coast to San Francisco, they said.

They used a tandem bicycle for the transcontinental U.S. trip, John said, adding that they bought their first tandem bicycle before they even got married in 1989.

“That was our first joint purchase,” Margaret said.

John said, “We had been talking about riding a bike across the country for many years.”

Last year, he turned 60, and their kids were either out of school or in college, so “Margaret thought it was a good time, and I agreed.” They took eight months off from their jobs to travel, he said. 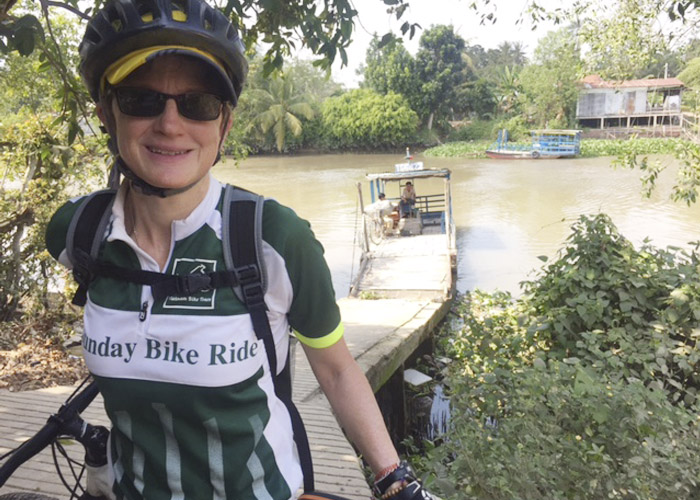 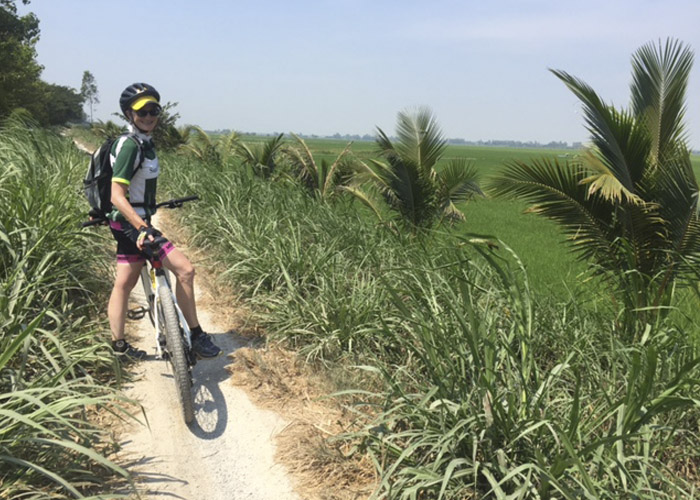 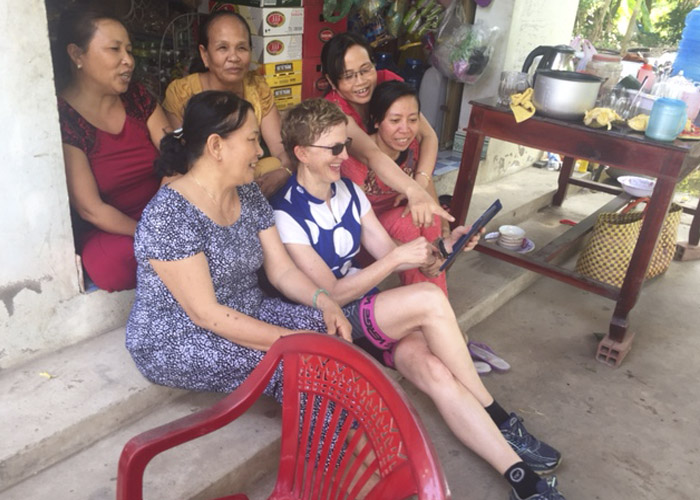 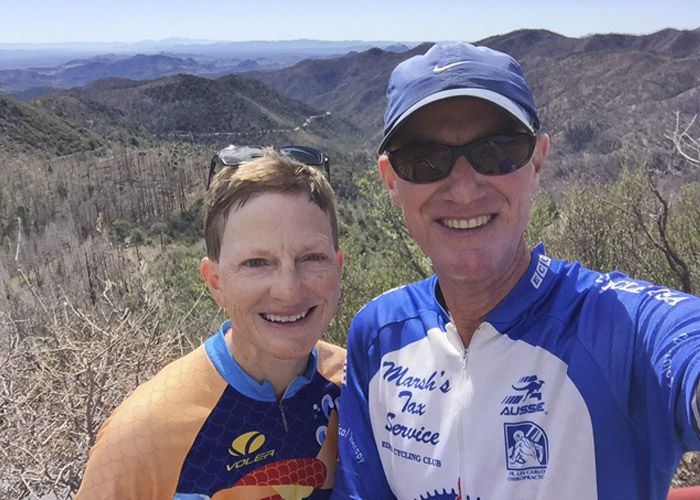 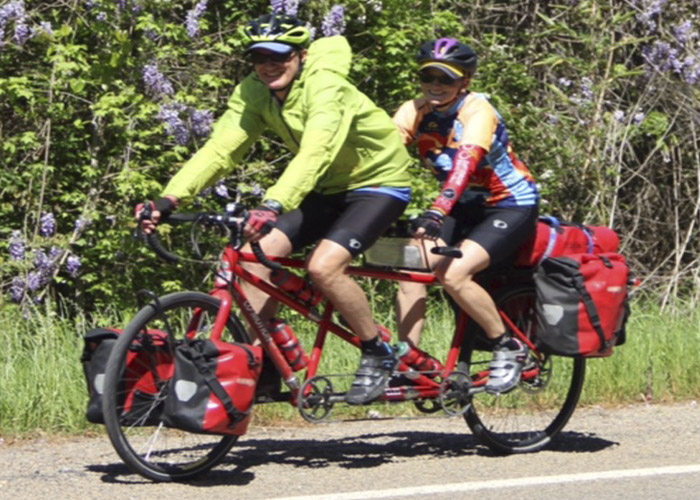 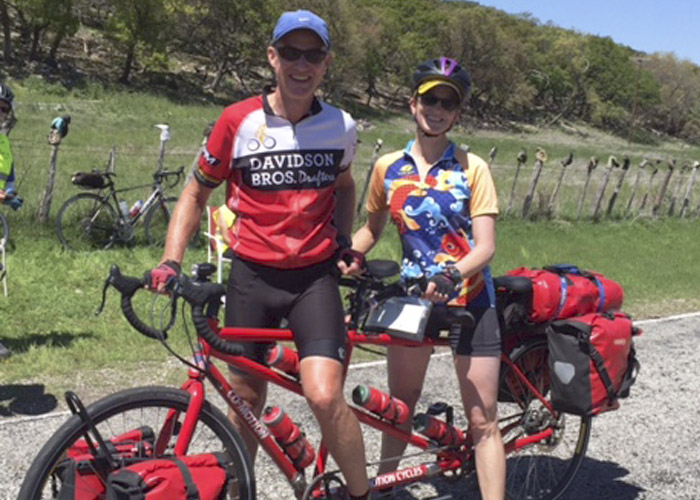 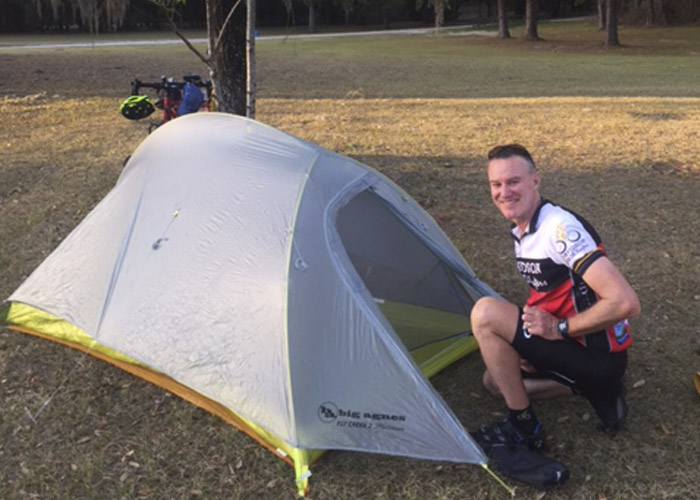 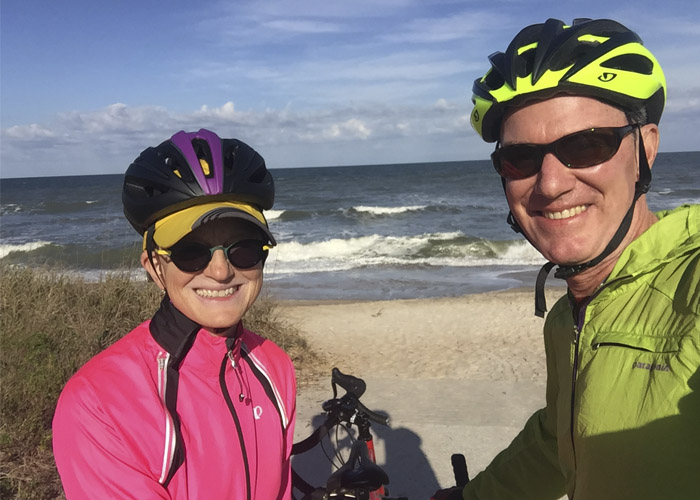 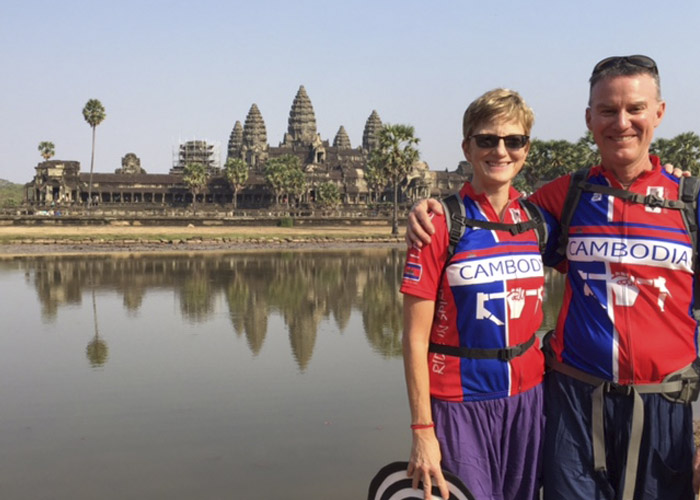 They started with two months in Asia, including bicycling through Vietnam and Cambodia.

Starting in Hanoi, Vietnam, they traveled south along the coast to Ho Chi Minh City, partly by train, then pedaled through the Mekong Delta and up into Cambodia.

“That was really fascinating. We had a phenomenal time. The country was beautiful. The food was amazing,” Margaret said.

“The most surprising was to learn how friendly and gracious the people were,” she said.

“Toward Americans in particular,” Jon added. “You would think there would be a lot of animosity towards Americans [due to the Vietnam War], but there really wasn’t.”

“The Mekong Delta was a tremendous highlight,” Margaret said, noting “all the agriculture,” and the area’s reliance on water transportation.

They said they stayed in hotels ranging from fancy American-style to very plain establishments, and had one stay in a home.

“I loved the cuisine there,” and everything is very fresh, Margaret said. Most people there don’t have refrigerators, so food is purchased fresh daily, John added.

One of their stops was at a cricket farm, where they ate fried crickets and drank rice wine with a 101-year-old farmer, Margaret recalled.

Vietnam was once colonized by France. John said you could still see a lot of French influence.

He said they bicycled 25 to 30 miles a day, less than half of what they would later average in the U.S.

Their transcontinental trip began by train on March 3 to Jacksonville, Fla.

“We started riding on March 5…said ‘Hi’ to the ocean in St. Augustine,” then headed west through Florida, Alabama, Louisiana, Mississippi, Texas, New Mexico, Arizona, and California, John said. “We averaged right around 65 miles a day,” and took only two days off.”

He said, “Neither of us had ever done anything that was 60 days in a row, essentially, of working out really hard. We were in amazing shape by the end of that, but your body was sore, you were always sore. Strong, you could ride hard and fast, and climb mountains” — but sore.

Margaret suggested that maybe they could have taken more rest days.

Still, “I loved it. It was such a dream come true, [and] it was fun to see how much better we got,” she said. There was a lot of satisfaction in planning the trip and then having it work out, she added.

Their longest day was 115 miles, across the desert in Arizona and California, followed by a 106-mile day in California, because towns were that far apart.

“It’s beautiful country, but it was really mountainous,” John said. The altitude was about 8,000 feet, and just when you thought you’d climbed the last hill there’d be another one.

There was some “good hard riding” on hills going up the California coast on Route 1, “very pretty,” he said. They saw migrating whales off the coast, and a California Condor.

“We had some wonderful regional cuisine. That was a lot of fun,” Margaret said.

“It was fun to be outside day after day. Mostly we had pretty good weather,” John said.

“Working together as a team on the bike” was another highlight, Margaret said.

Both sets of pedals on a tandem bike are on the same chain, so the riders need to do a lot of communicating, John noted.

“We were carrying all of our stuff, we didn’t have any support vehicle or anything,” he said.

“We had panniers on the bike in the back and in the front,” plus a duffel bag, for their sleeping bags, “a tiny tent and a tiny stove,” spare clothes, snacks and water.

They traveled light, and “it was really pretty satisfying to know that you can do life so minimally and still thoroughly enjoy it,” Margaret said.

Their only mechanical problems were two flat tires, John said.

Traffic was “a little bit dicey” in a couple of places where roads were narrow. They tried to ride during low traffic periods, and were lucky to go through El Paso on a Sunday, he said.

“We tried to be as visible as possible. The traffic was very kind to us,” Margaret said.

People were friendly, and interested in the tandem bike, they said.

They camped almost half the time, and spent the other nights in motels or bed-and-breakfasts, and in churches a couple of times.

Their route took them near the Mexican border, “so you saw a lot of the flavor of border life…You can see all the issues with people coming across the border and how dangerous that is for them,” John said. “You also can see what a big business the Border Patrol and all the industry of servicing the border is there.”

Before moving to Glens Falls, the Sawyers lived in Arizona, but not near the border, Dr. Sawyer said. “The poverty of it, the lack of jobs, the desperation that you could feel” came as a bit of a surprise,” he said.

It’s generally recommended to bicycle east instead of west across the U.S. because of the prevailing westerly winds, but John said they experienced tailwinds about as often as headwinds.

He said Florida is a good place to start because the terrain is relatively flat, whereas heading east from San Diego, the first thing you do is climb mountains.

They saw a lot of agriculture all across the country, such as crawfish farms and rice farms in Louisiana, and “tons of pecans, miles and miles and miles of them” along the Mexican border.

It was spring, so they saw a lot of wildflowers and cactuses blooming. “Incredible,” Margaret said.

Along the Gulf Coast they saw damage still remaining from Hurricane Katrina. “Block after block of towns, and all that’s left is front steps” of houses that are no longer there, John said.

He said much of their route paralleled old railroad lines, and they noticed that towns tended to be 80-100 miles apart, about the distance steam locomotives could travel between water stops.

A lot of the towns were obviously prosperous at one time, but aren’t now because they were bypassed when the interstate road system came in, he said.

In preparation for their trips, “we did a lot of spin class…and riding,” Margaret noted.