Phil and Grace Battiste’s 75th wedding anniversary was Wednesday, June 29. He’s 97 years old. She’s 93. Phil grew up in Hudson Falls, has lived there all his life.

Grace was 18, lived in Brooklyn. She emigrated from Italy at age seven.

Phil was 22. “He just got out of the service,” in the U.S. Army in Italy during World War II, says Grace.

“We met at a wedding in New York. His cousin was a really good friend with our family.”

“He said when he saw me that I was gonna be it,” says Grace. Phil “fell in love sooner than me.” Phil had competition — the future singing star Vic Damone, who hailed from Bari, Italy, as did Grace. “He lived on our block. My father said if he comes up those stairs, he’s goin’ back down.” (Damone died in 2018 at age 89.)

Phil and Grace’s romance heated up in Hudson Falls. Grace says, “The women liked to come down [to New York] in August. They would go shopping. They would say you’re going to have to come up here to Hudson Falls and see Lake George.

They did. Phil “got word that these people from the city were up here,” says Grace. “When we were staying here, he kept showing up.”

Two weeks later I started getting mail — not love letters — what he was doing, playing ball.”

Told by this reporter that he looks in his wedding photo like the Yankee great Joe DiMaggio, Phil lights up.

“I outscored them all,” Phil says. 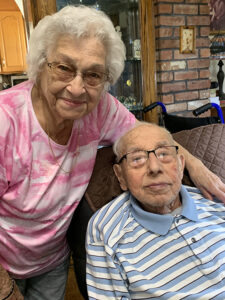 “He always wanted to be a coach,” says Grace. “He wanted to go to college.”

Back to the courtship, Grace recalls being at a dance where the jitterbug was the rage. She says Phil asked if he could “have the next slow dance.”

Commenting on her dress, he said, “I bet your next gown is gonna be white.”

Grace says she told her relatives, “You said he was a farmer — he’s faster than you guys.”

Phil proposed and Grace said yes. “Once he bought the ring, my father said, no long engagement.”

They married on a hot June 29, 1947 at Coney Island. Grace searches her memory for the venue — then it comes to her. The Halfmoon Hotel. It still operates.

The Battistes settled in Hudson Falls next-door to the family business, Battiste Grocery on John Street.

It was not an easy transition for Grace, who liked the city and had a career started. “I worked in Wall Street, Central Hanover Bank. In those days there were no men. They were all in the service. I applied. I took a test and took a job in the bookkeeping department.”

After the move to Hudson Falls, “I cried for a whole year,” she says. “I couldn’t get around. In ’47 the women didn’t drive. I didn’t know anyone.”

She says, “The store really helped me. I saw people, got to know people.” Grace adds, “I got along with his mom and dad. I can’t say love, but they liked me.”

She and Phil eventually ran the store and made it their residence as it had been for Phil growing up. They still live there.

Besides the store, Phil worked 20 years as a courier for BOCES, said Grace.

She says the grocery operated for 55 years. “We really carried a full line,” she says. “We were a little superette.”

They ground their own hamburger, saw the introduction of frozen food — “we were like the first.” The stainless steel coolers still stand between the former storefront and the living quarters.

She recalls other innovations like selling “nylon stockings, pantyhose” and “baby food in jars and all that.”

Of Phil and Grace’s six children, Frank has passed away, but the other five — Debbie Girard, Michael, Philip, Marie and Joseph — are all living.

Phil’s oldest sister, Nickie Piscitelli — who operated Mike’s Grocery a few blocks north on Maple Street — died at the age of 91 in 2013. She was famous for her May Baskets and penny candy.

Asked the secret of a 75-year marriage, Grace replies:

“First of all you gotta like each other.
“Second of all, patience.
“And you know what, you gotta have respect.
“Try to stay healthy.
“Try to keep the family happy.”

Share
Previous Should Lake George Village be dissolved?
Next Fireworks!