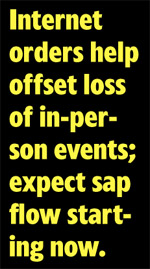 The pandemic continues to crimp in-person activities, but local maple producers are upbeat as they gear up for peak season of sap flowing and syrup making.

“Our sales have actually been up,” said David Campbell of Mapleland Farms in Salem. “Our restaurant sales are down,” but “people are eating more pancakes, or cooking more with syrup, I don’t know what they’re doing with it. Our Internet sales have been about double what they were before. All over the country.”

Matt Rathbun, of Rathbun’s Maple Sugar House in Whitehall, agrees. “We got a lot of orders online. A lot of people are staying home doing home cooking, and they wanna use maple syrup. Yesterday I sent one box to Alaska, one box to Connecticut and the other box to Lake George.”

Randy Galusha, of Toad Hill Maple Farm in Thurman, said, “Given the circumstances we came pretty close to the sales from last year.”

When the pandemic forced cancellation of maple events, Mr. Galusha says, “I expected it to hurt us a lot worse, because normally the maple weekends and Thurman fall farm tour — between those two events I would say that normally accounts for a third of our annual sales.

“We were probably only down around 10% down from our annual sales. We were able to make up for the loss of those events through curb service and Internet.”

The pandemic continues to limit events.

“New York State Maple Producers’ board of directors voted unanimously to cancel this year’s Maple Weekend,” said Mr. Galusha. “That’s a big annual statewide event for us. It’s two years in a row now that it’s been cancelled and its kinda unfortunate.”

Mr. Galusha says, “Once we shut down last year, we decided to go to a non-contact curb service which we’ve been doing for the past year. We’re gonna promote and do that for the maple weekend. They can go to our website or call in.”

In Salem, Mr. Campbell says, “This year we’re not gonna do a pancake breakfast, but we may be open for sales for a couple weekends. We haven’t decided yet.”

Rathbun’s Maple Sugar House has resumed serving breakfast on Saturdays and Sundays from 7 a.m. to 1 p.m.

“We are open at 50% capacity. We closed up in January, we opened the first week in February,” Mr. Rathbun said.

“The numbers have been pretty good for the restaurant. Numbers are way down overall last year of course, because we were shut down last year.”
“The problem is the spring is our business time and that’s when we got shut down last year. Who woulda thought a year later we still would be talking about it?”

Mr. Rathbun says, “The four or five weekends in the spring is a big part of our business, and it’s usually a zoo around here. I think its maybe gonna be more relaxed, hopefully. Not that I really want it to be, but it is what it is.”

Expecting the right weather this week; how many maple trees producers tap

The sap had yet to flow when The Chronicle interviewed three local maple producers last week and weekend.

“It’s been too cold. We’re waiting for warmer weather,” said David Campbell at Mapleland Farms in Salem. “It always comes.”

Actually, it’s expected this week, with temperatures above freezing in the daytime, below freezing at night.

How many trees do they tap?

At Mapleland Farms, Mr. Campbell says of taps, “Last year we had about 18,000 in, we’re planning on at least that many this year. Probably 75% are ones we own. We do lease a few trees from other land owners.”

Toad Hill Maple Farm in Thurman taps about 2,250 trees, all of which they own, said Randy Galusha.

“We actually counted last year so we would actually know. A lot of people in the maple industry, we have the same problem trying to keep track.”

He adds, “We currently own 853 acres and we presently are tapping about just under 50 acres. Eventually we’re gonna expand the sugarbush 100, 120 acres.”

At Rathbun’s Maple Sugar House in Whitehall, Matt Rathbun says, “We put in about 9,000 taps. Some trees have two taps. We have them in Hartford, Granville and Dresden.”

He said of his ratio of owned trees to leased, “probably about 60% leased.”
As to expectations for this year’s crop, Mr. Rathbun jokes, “Well, we all have an excuse now. If the trees don’t produce, it’s because of the pandemic.” — Zander