“I didn’t cry when I was sick, but now I’m crying and it’s tears of joy,” says Queensbury schoolteacher Tina Bureau.

Diagnosed a year ago with an aggressive non-Hodgkin’s lymphoma that did not respond to chemotherapy, Mrs. Bureau accepted a chance to participate in an experimental immunotherapy clinical trial at Dana-Farber Cancer Institute in Boston.

The treatment, called Yescarta and made by Los Angeles-based Kite Pharma, involved drawing Mrs. Bureau’s blood, separating out the specific T-cells, then reinjecting them after programming.

“The cells are engineered to attack just the cancer,” says Mrs. Bureau. “It’s like soldiers going into your body and killing the bad guys. I’m just in awe of science and technology. The timing for me was perfect. The stars all lined up.” 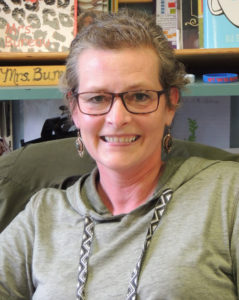 After about six weeks in the hospital, she had a PET scan in early May and was pronounced cancer-free.

She had a three-month checkup in September at Dana-Farber, and said “we celebrated all of the hard work the doctors and everyone did, and I got to give the doctors hugs. I look forward to seeing them now.

FDA gives it the official okay

Last week, the Food and Drug Administration approved the experimental treatment for adults with aggressive non-Hodgkin’s lymphoma who have been treated unsuccessfully with at least two rounds of chemotherapy.

When The New York Times reported the approval last Wednesday, Mrs. Bureau was one of the people they interviewed.

“I was given three different chemo regimens and each of them worked and helped shrink the tumor in my abdomen, but then the cancer would come back and the tumor grew with a vengeance.

“And every treatment makes you weaker. My hands and feet went numb. I still have numbness in my feet. I had ringing in my ears. Losing my hair was easy compared to the other side effects. I knew something else had to be done.”

Her oncologist at St. Peter’s Hospital in Albany encouraged her to get a second opinion. In early November she went to Dana-Farber and met with Dr. Ann LaCasce.

“I had heard good things about Dana-Farber,” Mrs. Bureau said. “She reviewed my records and did some tests to establish baseline readings, and then put me on the list for the clinical trial.”

At that point, her cancer was stage 4, meaning it had spread throughout her body. She was receiving her third different chemotherapy treatment when Dr. LaCasce called and said she was approved for the clinical trial and needed to stop treatment for a month.

“I got sicker and sicker, but they gave me prednisone to keep me strong, and conducted some more tests. I was excited and thrilled to be accepted for the clinical trial. I was happy I was being given a shot. I thought if anything worked, this would.”

It did. “Dr. LaCasce said the tumor disappeared in front of our eyes,” Mrs. Bureau said.

But the treatment itself is harsh, with potential life-threatening but mostly temporary side effects.

“There are definitely some dangers, which they are prepared for,” Mrs. Bureau said. “Some people did die before I was treated. For me, I had bleeding on the brain, I had a hard time speaking or remembering words, I didn’t recognize members of my family, and at one point I was in intensive care and doctors were prepared to operate on my brain.”

‘More difficult for my family’

She doesn’t remember much of her time at Dana-Farber. “What I’m telling you is what has been told to me,” she said. “This was much more difficult for my family.”

When she was first diagnosed with lymphoma, Mrs. Bureau says, “I was very calm. I had never looked up the disease online. Doctors told me about the survival rates, and I told them, ‘Don’t pay attention to the stats because I’m going to be the one that survives.’

“I truly didn’t have fear, but I saw it in the eyes of my husband John and our daughters Jenna and Mara…It’s kind of surreal but I knew that I was going to be okay. My husband cried when the doctor told us I was cancer-free, and my oldest daughter Mara sobbed on the phone when I told her.”

Mrs. Bureau returned to her classroom “for nine days in June. I wanted my students to see I was okay. They had sent me cards and videos and held fund-raisers. So had fellow teachers and folks in the community.

“The love and positive energy and money that strangers gave me is what cancer gave me. It showed me the good in the world that we don’t see. I got to see it and experience it and feel it.”

‘Every day is a gift’

“Every day is a gift. I’ve met other survivors of the experimental treatment, and we don’t stress about things that aren’t important. It’s all going to be fine.

“I have my friends and family and good health, and I look forward to each day.”

“The people here are so special,” she said of her co-workers at Barton Intermediate School. “My friend Sheila, who lives in Utica, made me a cake that said, ‘You kicked cancer in the butt!’ My daughters came home from school.”

Mrs. Bureau said she’s always gone to church, but “I was not one who prayed outside of church. I do now.

“When I was sick, I thanked God for what he gave me because I had so much. I had taken my husband for granted. I understood that whatever was ahead of me, I would be okay because of God.”

And, she says, “I got thinner and I never would have cut my hair this short, but it turns out I look good in short hair! The key is finding the bright side!”