Her take on some of the Adirondack Film Fest

By Cathy DeDe, Chronicle Managing Editor
With far more to see than time to see it …

With far more to see than time to see it in, there’s no way any human could have experienced every offering of the Adirondack Film Festival. Your intrepid reporter did her best. Some things of note:

Daniel Roebuck was the star of the weekend. His feature-length movie Getting Grace won Best of the Fest, by audience vote.

He is a TV and movie actor, with recognizable face, from Matlock to The Fugitive. Getting Grace is his first self-created project, a tear-jerker-with-hope about a quirky teenaged girl with cancer who visits a funeral home to learn about death and winds up teaching the funeral director about life.

Mr. Roebuck wrote it, directed it, and stars.

He filmed it, almost stubbornly to hear him tell it, in his hometown of Bethlehem, Pennsylvania, a former steel town with a growing arts vibe — and he insisted on casting locals for many of the leads.

That included the “find” of the movie, young actress Madelyn Dundon who played the scrappy, indomitable, charming, vulnerable Grace.

It’s a sweetly hokey story that accomplishes what it means to. It deserved its win — and now whenever it is screened it’ll have the Adirondack Film Fest stamp on its opening credits.

Mr. Roebuck is himself — star or no, he looks you in the eye, speaks warmly and openly, remembers names. He was everyone’s friend by the end of the festival — and lucky us, he tells us he and producer John Gatz (quieter, but also a super nice guy) plan to come back to film his next indie movie, about a Catholic school nun and a reluctant football player. 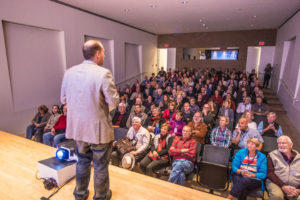 One of my favorite movies of the weekend was a drama short, ‘The Flood,’ with Ed Asner as a new widow struggling with the loss of his beloved wife.

What made it work was some wrenchingly beautiful writing by Seraphina Nova Glass, real emotional honesty, and Mr. Asner. From the opening scene in the funeral home, when you don’t even see all of his face, you see his depth of sadness. But he’ll also recall how his wife was a pain in the butt, things that drove him crazy, “but I didn’t mind.”

Director Adam Dietrich was another friendly soul, making connections with numerous festival-goers who were eager to talk about what they’d seen. It won Best Drama, again by audience vote.

One take-away from seeing so many movies, especially shorts, is that earnestness may be the death of art. Well-meaning will earn you accolades, but it matters to be surprising, too. (That’s something Daniel Roebuck and I got talking about, a little.)

Other shorts I liked were That Party That One Night, a slice of teenaged life that rang perfectly true; Hinge, an explosive portrait of a woman who gets unhinged when the key to her apartment goes missing; and Hit or Miss, about an amateur boxer remembering her mother.

There was also a wild six-minute piece, Temp-to-Perm, loosely exploring how a “straight” job interview might go awry if it followed theatrical casting protocols.

Director-actress-writer-producer Kat Hunt was a notable presence walking around, stylishly quirky and artsy-urban. We bumped into each other here and again, so got to chat. Interesting woman, she also asked the best question of the screenwriters panel — from the audience, mind: “Tell us something honest about writing.”

Who knew, even Craig Pearce, the guy who co-wrote Strictly Ballroom and Moulin Rouge with Baz Luhrman, weeps on the floor mid-process, sure that he’s a flop.

Ms. Hunt’s movie What’s Revenge, a 55-minute feature about a woman looking to get back at the men who have made her good friend’s life miserable, was deeply weird and humorous, sort of, with an ending that involves spanking and yet is so charming about it.

‘Dave Made a Maze’ is the one that most sticks with me. The feature was a sleeper hit of the festival, warranting a last minute added screening after so many people asked each other, did you see that one?

In it, an artist who never quite finishes any project builds a maze out of cardboard boxes that takes on a life of its own, causing horror and even when his girlfriend, Brooklynite friends and a trio of filmmakers go inside to try and rescue him.

It’s strange and funny in a way that makes you catch your breath rather than guffaw. It’s also a good yarn that maybe has something to say about artistic process — both for the fantastical making of it (on an absurdly small budget, with lots of cardboard), and for its reflections on creativity, life, meaning, journey.

“It’s bigger on the inside,” the artist’s plaintive explanation for how he got lost inside a box in the living room, is absurd but also resonant.

Another much-talked-about film was ‘Loving Vincent,’ an obvious grabber on the opposite spectrum from Dave Made a Maze — similarly impressive for its creativity, presumably costing, who knows?, millions to make. It’s an oil-painted animation that took the work of 125 artists, 65,000 paintings, a painstaking process. Gorgeous, a moving story about Vincent Van Gogh, a magical feat in its making and its telling. We voted it Best Feature Film.

Look for it at the Oscars.

There’s more: ‘Princess Bride’ actor Chris Sarandon, speaking after a screening of the movie to mark its 30th anniversary, was charming and chatty, sharing stories about Andre the Giant and getting a little weepy when he talked about sharing the movie between generations, with his children and now grandchildren.

‘Lost in Paris’ is dead-on slapstick fun of the most old-fashioned, Buster Keaton kind. Lead actress (and co-director) Fiona Gordon is fearless, her physical comedy all elbows yet graceful, as if a scarecrow met a ballerina. Good Time stars an unrecognizable Robert Patinson as a small time crook who thinks he’s got everything under control when a bank heist goes madly awry. He doesn’t.

I’m grateful for the whole Film Fest program, and plan to use it as a guide to check for the movies I didn’t get to see, maybe on one streaming site or another.