Governor Andrew Cuomo’s 2017 statement that the Glens Falls area has one of the highest cancer rates in the state became a topic at Monday evening’s public program on air pollution and human health hosted by the Clean Air Action Network at Crandall Public Library.

An audience member asked the panel about it. North Country Public Radio reported that Gov. Cuomo said in 2017, “There is a deviation of about 20%. Warren County has one of the highest rates of cancer in the state. Why? What is the difference? What’s going on in Warren County that’s different than what’s going on in Queens or Brooklyn? 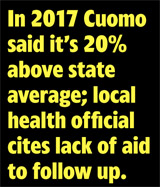 “Let’s study the health factors, the demographic factors, the environmental factors and find out why there’s that deviation. If we can find out what’s causing it, we can go further down the road in preventing it.

“The Department of Health and DEC both — because there can be environmental factors at play here also — will participate in the study. It will take about one year and then it’s another step toward preventing it, resolving it and saving lives.”

At Monday’s program, panelist Claudia Braymer, who represents Glens Falls Ward 3 on the Warren County Board of Supervisors, asked Warren County Public Health Director Ginelle Jones, who was in the audience, to expound on the subject.

Ms. Jones replied, “There was the identification that Warren County had the high cancer rates — it was lung cancer, laryngeal cancer, oral cancer and brain cancer that were the top cancers.”

She said, “When the State came, it was a little disappointing. We didn’t have a lot of notice. We basically found out in the news that it was coming to Warren County. We participated in a presentation for elected officials and for the community.

“To be honest, I was a little disappointed, because I spent a lot of time getting stakeholders at the meeting so that we could kind of really figure out what was going on in our community. When the State came, it was pretty much a mapped, scripted presentation that was provided at the three venues. And there wasn’t a lot of input.”

Ms. Jones said questions arose regarding how to study the situation.

“We have people seeking treatment elsewhere, not just at our hospital,” she said. “So you kind of lose a lot of people if you just look at our hospital.

“We also have a lot of people moving into our community, so it’s kind of hard to get a level playing field for a study. So it’s very difficult to say that your exposure when you retire up here came from here.”

“We saw that when the State picked Warren County as top, we’ve seen no resources,” she said. “We’ve seen no studies come from that. We were told what they thought it was without looking at options.’

“Even death certificates might not share military information, as to whether people were exposed,” Ms. Jones said. “There are just a lot of backgrounds that people have that are hard to quantify in a study.”

“Studies, I think, are hard, given the limited resources that we have,” she said.

She said, “I’m sorry I don’t have all the answers.”