Seeing Let’s Be Leonard live is a party. Their repertoire ranges from buoyant romps to sultry sing-alongs. They’re musicians who smile, laugh, play their hearts out and on occasion, don old ladies’ clothing.

But COW. (“Cow” is Karl’s old nickname) is not thrown together like a mismatched hippie outfit; it’s one cohesive product — well put-together, tasteful, professional. The songwriting is impressive. 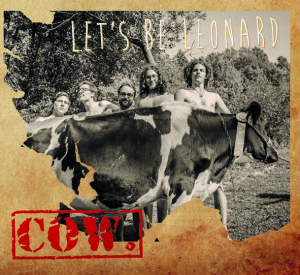 One reason that Let’s Be Leonard shines is an undeniable chemistry between Mr. Griffin on guitar and Mr. Dunn on sax. The two often act like a unit, playing unison melodies that create a melding of two instruments with a unique voice and timbre.

And rather than wait until after the second chorus to feature some big blow-out sax solo, Mr. Dunn is part of Let’s Be Leonard’s infrastructure, a solid background voice when the spotlight’s not on him.

Opening with a back-porch vocal chord that kickstarts the easy, breezy, upbeat “Eliza,” COW. is a sort of musical equivalent to a sunny summer afternoon ­ — barbecue smoking, friends laughing, Frisbees looping around the yard.

Do you have trouble getting up in the morning? Set your alarm to “Frisbee,” a whip of a song with an addictive sax-guitar melody and a lightning-quick drum solo by Mr. Guay.

“Jump Ship” puts on the brakes, a sad, contemplative acoustic lament that Mr. Griffin sings with true regret. “We’ve done some pretty stupid things,” he sings, “like fall in love when we were young.” Yeah, I did that; maybe you did too. I get emotional just writing that line out here.

The airy and ethereal “Puppet Dance” further diversifies COW. with another gem of a unison melody on sax and guitar. I got the feeling that the music was floating somewhere above me in space. Sure enough, Mr. Bertrand enters: “Sister in the sky, no one knows you’re there… Pulling strings, see the puppets dance.”

“Wrong Bros.” is a roller coaster with an insane beat drop that falls from menacing triplets before settling into a reggae groove.

Evening sets in and stars rise over the backyard on the twelfth and final track, “Young Sprite,” a laid-back triple-meter blues in which Mr. Griffin stands out with some Steely-Dan-esque guitar runs. A smooth ending to a sweet summer day.

Keep an eye on Let’s Be Leonard. COW. is a debut that these young dudes should be proud of. They’ve put out a whole product. The songwriting stands on its own — no overproduction or pitch processing, no frills, bells or whistles. Just good organic rock with a character and voice of its own.

You can see Let’s Be Leonard tonight, Wednesday, Dec. 30, at Gug’s in Glens Falls and on Friday, Jan. 1, at Putnam Den in Saratoga Springs.

You can buy COW. on iTunes, CDBaby and Spotify (with merchandise soon on BandCamp). Check out Let’s Be Leonard on Facebook and Instagram.