Glens Falls native Kate White’s newest murder mystery, Such a Perfect Wife, is set in Lake George and involves people and places from Queensbury to Fort Ann. Kate, of course, is the St. Mary’s grad who went on to become editor of Cosmopolitan.

In this novel (and prior ones), her main character Bailey Weggins is a reporter for a website called Crime Beat. She’s sent here after a woman disappears.

She connects with a Post-Star reporter named Alice Hatfield who drives a red MINI Cooper. They join forces — in pursuit both of the story and villain.

Alice is fictional, of course, but in the acknowledgments at the end of the 354-page book, Ms. White thanks actual Post-Star writer “Kathleen Plalen Tomaselli, investigative reporter and author.”

She also thanks Glens Falls retired Police Chief Will Valenza and investigative experts from elsewhere, plus her Glens Falls brothers Mike, Rick and Steve.

The book arrived in The Chronicle mailbox on Friday morning and I read it during the weekend. It rolls right along. Ms. White writes easily and well. It’s an entertainment, a page-turner.

It starts with one murder, reveals two more that occurred years ago and shocks us late with slaying of a main character.

She knows a thing or three about crime scenes and investigations — that after “about twenty-four hours” of rigor mortis, the body will relax; that a killer only has “a short window before a body leaves a scent that a cadaver dog can pick up”; and that deputies examining a car in a crime “conduct tests with luminol, which highlights traces of blood even if there’s been a thorough attempt to bleach them away.”

The narrator always sets scenes — a quick description of a room’s furnishings and design and especially of people’s appearance. “Sheriff Killian…was about fifty, handsome in a sheriffy way, and lacking the potbelly so common in men in his age group.” Another guy: “With his tanned skin, sandy hair, and light brown eyes, he vaguely resembled a pair of chinos.”

Women, too: “Kelly was wearing dark pants and turtleneck sweater in burgundy, a color that to my knowledge had never flattered anyone.” Another: “She’d blown out her hair in long, pretty waves, and she was wearing about twenty-five minutes’ worth of makeup, including enough lip gloss to slow down any vehicle attempting to cross from one side of her mouth to the other.”

Ms. White energizes her writing with active verbs. She didn’t just drive, she “bumped down the road.” “His mouth was half scrunched.” “I peeled off my clothes.” “I shrugged out of my jacket.” 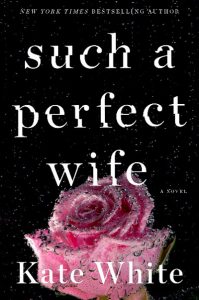 One of Ms. White’s early advice books urged young women to be “gutsy,” and her character Bailey Weggins goes where law enforcement tells her not to. Ultimately, of course, she wins their respect because she’s so good at investigating and she risks her life pursuing the story and crime.

There are references to real-life places like the Courtyard by Marriott in Lake George, where she stays after the roadside motel where she’d been leaves her too vulnerable to the guy stalking her.

She references the Catholic church in Lake George, a car dealership and a chiropractor in Queensbury, a bottling and beverage distributor and a suspicious bar called “Muller’s” in Fort Ann.

Route 149 that connects U.S. Route 9 to the west and U.S. Route 4 to the east, is seen as a transport route for drugs.

Locals inevitably will search for true-life references, but this is pot-boiler, not exposé. Now retired from the magazine world, author Ms. White writes books as her pastime and has fun doing it.

Share
Previous Big upgrades at GF’s East Field
Next Mark: A little bit about the Jacob Houston show at Hyde