East Field is getting new energy-efficient lights and other improvements.

“It’s a good start,” Mayor Dan Hall said. “The lights have been bad for a long time.”

LED lights — 128 of them — are being installed to replace the old halogen lights that it is said took forever to warm up and cost a bundle of money to use.

The City of Glens Falls is using a $50,000 clean energy award from NYSERDA and $34,000 in National Grid savings and rebates to pay for most of the $120,000 cost, said Jeff Flagg, a sustainability consultant and grant writer for the City. 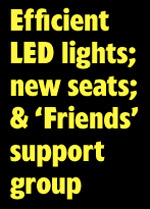 He said Ben Bernard, who leases East Field from the City, has agreed to take over paying for the lights, given the dramatic savings. Mr. Bernard owns the Glens Falls Dragons baseball team that plays in the Perfect Game Collegiate Baseball League.

Mr. Bernard also found some stadium seats, bleachers, railings and picnic tables from a Newark, N.J. stadium about to be razed. “Ben went down and took a look at it, and thought it would be a good investment for the City,” Mayor Hall said.

Some of the new lights.

The mayor said the City spent about $16,000 on 1,500 seats and other items from the Newark stadium, and the Friends of East Field group will start a fund-raising campaign to help pay for the installation this fall.

The Dragons open the season at home on May 31, with Joseph Girard III throwing out the ceremonial first pitch.