JG3 scored 24 in debut as starter for Syracuse; he’s a sensation

By Gordon Woodworth, Chronicle News Editor
“Are You Ready for the Joe Girard Show?” asked commentator …

“Are You Ready for the Joe Girard Show?” asked commentator Brent Axe on Syracuse.com on Monday of this week. “Girard doesn’t have the whole world on his shoulders, but he already has Syracuse basketball fans in the palm of his hand.”

Joseph Girard III, in just his third game playing for Syracuse University, was installed as the starting point guard and scored a team-high 24 points leading the Orange to an 89-67 win Saturday over Seattle University.

In 31 minutes, the Glens Falls native was seven-of-eight from the field, five-of six from three-point range, five-for-five from the foul line, and added five rebounds, two assists and two steals. Oh, and he was the last player introduced, a spot often reserved for the team’s top upperclassman.

“It was a fun experience,” he told The Chronicle by phone before Monday’s practice. “It was a dream come true. It’s always been my dream to put a Syracuse uniform on and to do it in such a fashion was kind of cool.

“At the same time, nothing has really changed for me from high school. I’m out there trying to win as many games as I can and just do whatever it takes. I think the way that I played helped the team win, but we all played pretty well. We just have to keep the momentum going.” 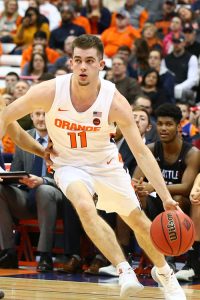 Any nerves? “No, I’m never nervous,” JG3 said. “People who have watched me back home know I’m not one to get nervous. I’m not one to shy away from anything, really. I think that’s been the biggest thing for me here is just being the player I have always been and just competing.

“I’m the same me. I’m always going to be the same me. One of the things Coach Boeheim says over and over again is you’ve got to do what got you here, no matter who you are. No reason to change.”

vIn the post-game press conference, Seattle coach Jim Hayford quipped: “I wish they would have waited one more game to switch their point guards.”

Elijah Hughes, Syracuse’s best player, told the media after the game, “That kid is something else. He’s not scared of nothing.’’

Fellow freshman Quincy Guerrier said, “Joey is a leader. He’s 18 years old but he’s a leader. He was ready from the beginning…He was in control today. He was playing like a real point guard.”

Starting shooting guard Buddy Boeheim said, “He can get in the lane and he has his pull-up and he has his 3 and he showed all that tonight. He was really efficient. That’s one of the better games I’ve seen at the point guard position.’’