Jason, ghoul for the day at Great Escape Fright Fest

Accepting an “invitation” sent to The Chronicle in the form of a gruesome evidence bag full of blood and body parts (not real, I hope), I attended a “Black Carpet” event at Six Flags Great Escape this past Friday night.

Part of the invite included an interactive opportunity that I couldn’t resist: My girlfriend Tiffany and I — along with other members of area media outlets, were to be recruited as zombies and ghouls and participate in Fright Fest.

We were invited to join the spooky cast of one of the haunted houses.

We arrived, and met up with our host, Marketing Coordinator Jessica Hansen and our companions for the night.

These included Albany blogger Laura Folos, “Head Nerd in Charge” of her Nerdvana Kingdom Website with her friend, Joel.

Also joining us was an entire family from Alcove, N.Y., representing Columbia Green Media: Marlene and Colin McTigue and their children Paddy and Maddie McTigue and Emily Sulik.

It was a well-rounded group.

After a brief introduction session, we were shuttled by the park’s Marketing Director Dave Johnson to the dressing room, where professional make-up artists Phil Singer and Rich Conley were busy working on some staff actors.

It was cool to watch the transformations and how they were done. I was impressed with how little time it took them to create their monsters — about 15 minutes and they had regular people looking like Hollywood-style zombies.

I sat in the chair with Mr. Singer, an Amsterdam resident who went to school for illustration, works as a sculptor, and picked up the make-up trade along the way.

He was a nice guy, and was very informative as far as the process.

He asked me what I wanted to look like, and I said “just go to town.”

He did. He applied some latex to my face first, and then added some additional texture — with oatmeal.

It went quickly, and when I saw the final result, I was impressed — and a little scared. I was a zombie, just like that.

Tiffany followed me in Mr. Singer’s chair, and she was treated to a similar process, as were the other members of our party.

I got a chuckle listening to the make-up artist’s casual banter during Tiffany’s sitting: “Okay, now I’m going to crack open your skull a little…”

The best were the two young girls who ended up looking like the ghost twins from The Shining, very spooky. 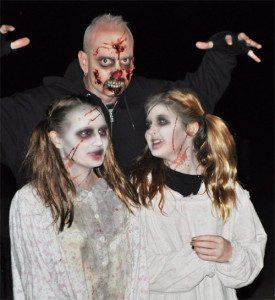 Our motley crew posed for a couple of photos, then were marched off to Skull Manor, the haunted house where we would be performing.

“Ghoul School” was pretty much a tour through the attraction, some quick tips from the regular actors on how to scare the living daylights out of people, as well as rules — including no touching the guests.

We were placed in various areas of the house. I ended up in the “kitchen,” lounging in a chest freezer, while Tiffany was in another room, strategically poised in a shower, ready to pounce. We stayed for almost an hour, doing our best to creep out our “houseguests.”

I got a few shudders from my victims, and I heard a couple of shrieks coming from Tiffany’s bathroom, so she must have been doing her job well.

“Skull Manor” was actually well put-together and pretty scary, most especially an area with twisting hallways engulfed in thick fog and bright white strobe lights — an environment which was impossible to see in, so feeling your way along the walls was the only way to navigate through.

My 10-year-old son, Julian — who was one of the first people through Skull Manor — joined up with me after and gave me his review of my performance.

“I wasn’t really afraid,” he said “but it’s only because I knew it was you. You did look pretty scary.”

We all attended a reception in “Ghost Town” afterward. We were treated to some refreshments and enjoyed a show by a pretty talented group of dancing Undead.

Then we all walked through the park, went on some rides, and continued to play the part by glaring evilly at other park goers. I admit, that was a lot of fun.

Then, I hurried off to band practice, which I was late for, in full zombie makeup. My bandmates were neither scared, nor very amused.