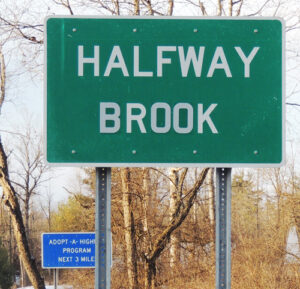 “We are pleased to inform you that the U.S. Board of Geographic Names, at its October 8, 2020, meeting, approved your proposal to change the name of Halfway Creek in Washington County and Warren County to Halfway Brook,” said the letter from Jennifer E. Runyon, “Research Staff, U.S. Board on Geographic Names.

“The change has been entered into the Geographic Names Information System, the nation’s official geographic names repository, which is available and searchable online at https://usgs.gov/geonames/domestic-names.”

In 2008, The Chronicle first raised the issue of the stream’s name after two readers told us angrily the state Department of Transportation had installed “Halfway Creek” signs on Ridge Road (Route 9L) near the new bridge over the waterway.

In 2013, New York agreed to shift it back to Halfway Brook. Now the U.S. agrees. The new entry in the Geographic Names Information System elaborates:

“Halfway Brook: stream; 31 mi. long; heads in the Town of Queensbury at Wilkie Reservoir…flows SE then generally NE through the Town of Kingsbury and the Town of Fort ann to enter the Champlain Canal at Fort Ann; named for the stream’s location about halfway along a military road between Fort William Henry on Lake George and Fort Edward on the Hudson River; Washington and Warren County, New York: …

By Mark Frost, Chronicle Editor It was one day, not an overnight. It was at …