Indians’ icing on the cake!

The 29-1 Indians scrapped and clawed their way to a gritty 77-70 overtime win over South Bronx Prep in Saturday’s semifinal in front of 5,910 fans. Sassy senior Trent Girard sparked the win with 13 well-timed points, including a three-pointer late in the third quarter that nearly brought the house down, sparking the come-from-behind win.

Sunday against Cardinal O’Hara, Glens Falls jumped out to an 18-3 lead on four Girard 3-pointers — two by Trent, and two by his cousin Joseph Girard III, who obliterated the state scoring record, finishing with a mind-boggling 4,763 points. The Indians then hung on, snuffing a late Cardinal O’Hara run before cutting down the nets for the second time in a week.

JG3 said, “We just played Glens Falls basketball, stuck to the game plan and didn’t really think too much of our opponent…We do all of the little things to win.” 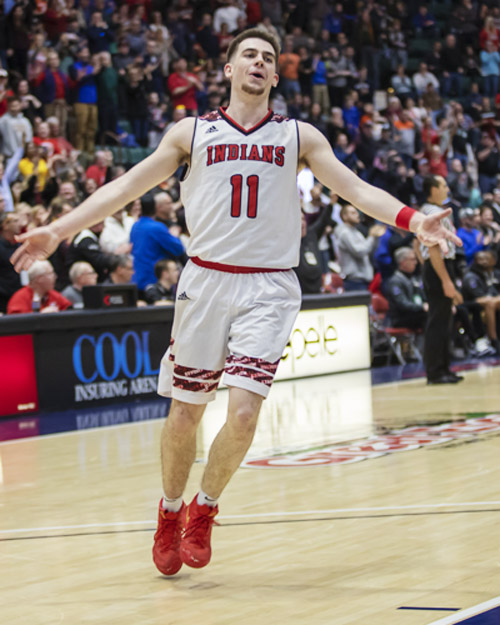 He was tournament MVP after scoring 85 points in the two games on a sore ankle, winning his third state title in front of his next coach, Syracuse’s Jim Boeheim.

“We go into every game confident,” JG3 said, “and the game plan was the same this weekend, shoot a lot of 3s and put up a lot of points. And that’s what we did.”

Coach Girard said, “Since this group was in Little League and when they started playing basketball in second grade and started playing football together, they just have that grit thing of competing every game and no matter the competition, never quitting and having the will to win. That’s who they are. That whole group is like that, kids stepping up for other kids.

“When things weren’t going great and Joe’s not making his shots and they are double- and triple-teaming him, Trent [Girard] was able to make big shots. And Rece McClements comes in out of nowhere to make two big shots when we needed him at a really big time.

“Kyle Vachon to get those rebounds like he did, and Connor Girard to hit a three. He hasn’t had a three in I don’t know how long. And then David Barclay banked one in. We don’t care how it went in, but it went in. And Nick Danahy this weekend was awesome. He did a great job in both games.”

Kyle Vachon said “To be undisputed champions of New York State is a great feeling. This is the last time I will compete for Glens Falls with my best friends, so it’s very bittersweet. But we went out with a win. Our goals were to win the Foothills, win Sectionals, Regionals and States. I never put the Federation in there, because to be honest, I forgot about the Federation.

“We just don’t get intimidated. We are so competitive. It’s who we are. We’re Glens Falls. We don’t back down from anybody.”

Nick Danahy said, “This is surreal. We wanted to go out with a win, and this shows we believed in ourselves, and never quit.”

“It’s always exciting to hit big shots. I felt I had to step up. That’s our attitude. We never back down, and now there’s no team in New York State in Class B that is better than us.”

David Barclay said, “We know who we are. We are tough and we are gritty. We believe we are going to win every game. We knew we had the firepower to go far in both football and basketball. It’s a dream come true.”

Rece McClements said, “This is what we worked for all year. I knew we had a lot of talent. Cardinal O’Hara was tall and they killed us on the boards, but we found a way to win. We knew if we kept shooting, we could win. With Joe, we know we can win any game.”

JG3 said, “We overcame a lot, we deal with a lot, we take a lot of crap from people, just because we’re from Glens Falls. Overcoming all of the adversity, all of the hate, and finding ways to win, is what I’m most proud of.” 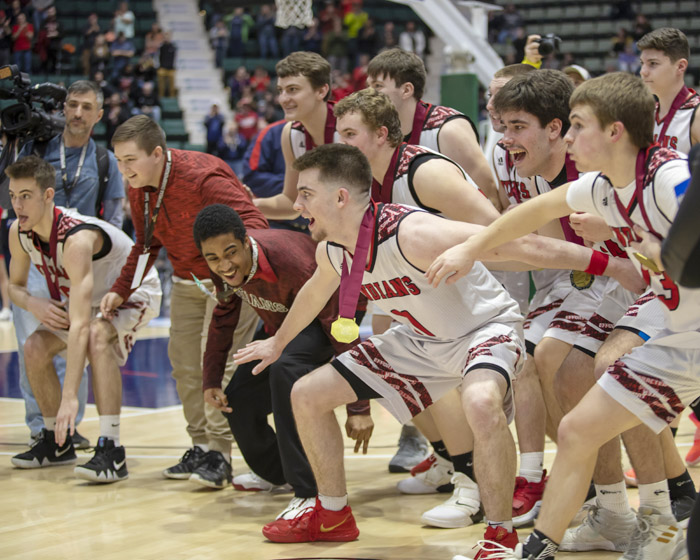 Waiting for the Federation plaque. Photo by Black Duck photography

Not only did Glens Falls win last weekend’s Federation Tournament of Champions at Cool Insuring Arena, overall attendance was 10,800, including 9,860 who watched the Indians win the Class B title.

Saturday afternoon, the line waiting to get in wrapped around the building. Attendance was 5,910 as Glens Falls beat South Bronx Prep, 77-70, in overtime.

Sunday afternoon, 3,950 fans came out to see Glens Falls finish the deal with an 88-79 win over Cardinal O’Hara.

It was the Federation tournament’s last year in Glens Falls. Next year, it moves to Fordham University in the Bronx.

Arena general manager Jeff Mead said the Federation rents the building and “they get almost all of the ticket money.” He wouldn’t say what the rental fee was.

“Friday was average, Saturday was very good, like a decent hockey game, and Sunday was good,” he said. “Overall, we did much better than we had anticipated coming in, all because Glens Falls played two games. It was a great weekend.”