By Gordon Woodworth, Chronicle News Editor
The region’s craft brewers are rallying around Bert and Christian …

“There are a couple of ideas on the table,” Mr. Borchardt told The Chronicle. “One local brewery already has an event slated in May, and said they would use it as a fund-raiser for Common Roots. And Saratoga Winery has offered to host an event. They have significant parking and space.

“And the obvious one is breweries brewing a special beer to sell with the profits going to Common Roots.” 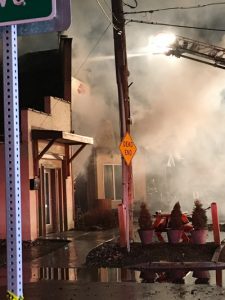 He said, “Across the industry, we’re competitive, but at the end of the day, we’re brewers, and it doesnt’ matter what name is on the beer. We all want to brew the best beer. And we help each other. A couple of weeks ago, I needed a bag or two of grain, and Christian [Weber] let me borrow them. There’s a collegiality among brewers.”

Argyle Brewing Company posted, “Christian, Bert and the Common Roots family; there are truly no words. Stay strong, our family and the brewing community are here for you.”

Mean Max Brew Works wrote, “Our hearts go out to our friends at Common Roots Brewing Company. We can’t begin to imagine what you are feeling right now but know that we all support you.”

Brendan Murnane of Bolton Landing Brewing Company wrote, “We’re praying for you up in Bolton. Please let us know if you need anything during these difficult times.”

SlickFin Brewing Company in Fort Edward wrote, “Our hearts go out to Common Roots Brewing. We wish you a fast recovery and we’re just so sorry to see something like that happen to such a great business.”

Battle Hill Brewing Company in Fort Ann wrote, “So very sorry to our friends at Common Roots! So terrible. Thinking of you all and the firefighters. Be safe!”

One local business owner wrote, “Can’t keep good people down. You have an amazing reputation, community support and you will prevail. Must be rewarding to see how so many people care for you and your entire family.”

A woman from Glens Falls wrote, “We love you, your philanthropic nature and look forward to the Phoenix that will rise from these ashes.”

The Webers’ attorney Matt Fuller, acting as spokesman, said, “We have already started the process of putting together a design team. We’ll be back.”

Seven fire companies responded to the fire. All employees and customers got out safely.

Mr. Fuller said investigators said the fire appeared to be “purely accidental.” He said the fire started in the building’s northeast corner, where the brewing process begins.

Late Monday night, the Webers said on Facebook, “Earlier this evening, a fire broke out at our brewery and taproom in South Glens Falls. While this is a very difficult time, we are grateful everyone got out safely. We appreciate the efforts of our local first responders and thank each of you for your thoughts and support.”