The Harvest Restaurant celebrated its 50th anniversary on Tuesday.

As is their style, Phil and Linda Hart didn’t make a big fuss about it, although they did come up from their home in Florida for the occasion.

“We’re not pushing for recognition,” Mr. Hart said. “We don’t advertise. We just do our job, do what do every day for the last 50 years.” 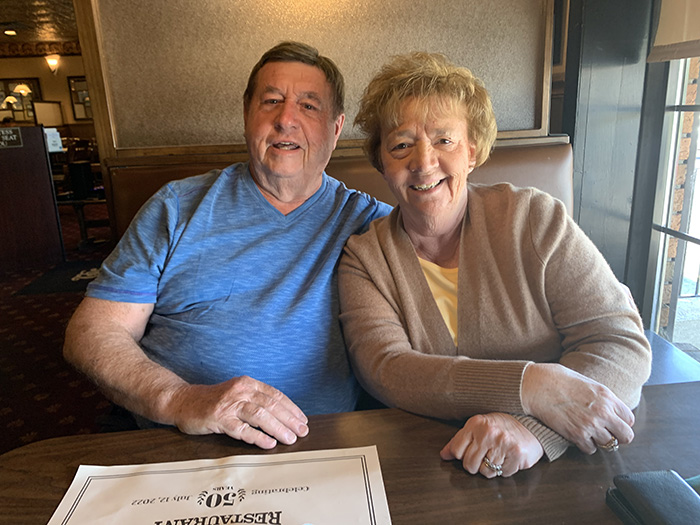 His wife says, “Phil laid a big footprint and we all follow it.”

The Harts keep an apartment in Glens Falls, but basically run the business — and keep a tight ship — from afar.

“We have all the set-up in Florida — cameras, computers,” says Mrs. Hart, who does everything from payroll and hiring to scheduling and tracking down items in short supply, like cherry peppers were this week.

They’re aided by a staff of long-time employees. “It’s a family.”

Mr. Hart, now 82, got his start with his father Harry Hart in Glens Falls at what was hen Hart’s and is now Talk of the Town, on Hudson Avenue.

“I worked for him for 9 1/2 years before I came here. That’s how I learned the business. It started out we were gonna do this together. Then my father said he didn’t want to do it.”

In 1972 he bought a lot from Merwyn Pasco on the corner of Bay and Cronin Roads in Queensbury for $17,000, “because that was what I could afford.” 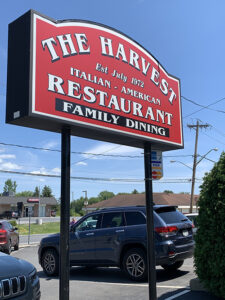 “Then I bought another lot in the back,” and a third and fourth. “I bought the lots all around except for the power equipment business” that existed just south.

Why the name The Harvest? It’s short for Hart Invest, Mr. Hart explains.

“I just continued the menu pretty much,” he says. “Changed the sauce a little bit and the dough a little bit. Made them both a little spicier and a little sweeter.”

Mrs. Hart recalls early days when Mr. Hart would stay all night making dough. He says of the long hours building the business, “You don’t think about it. You just do it.”

In the kitchen, “we have a pizza side and a short order side,” says Mrs. Hart, and “we cross-train all our staff” to do multiple jobs.

“The kitchen is what keeps the restaurant successful,” Mr. Hart says. “The consistency.”

The Harvest’s managers are Jaime Hobbs and Kelly Fuller, who are also sisters. They’ve been here for 26 and 22 years respectively.

Of the staff, “we’ve got people that have been here 35 years,” she says. And customers that go back that long and farther.

They have about 30 employees.

“We have huge payroll and they’re worth every nickel,” Mrs. Hart says. “They all have pride and they’re loyal and they never say no to come in for work.” 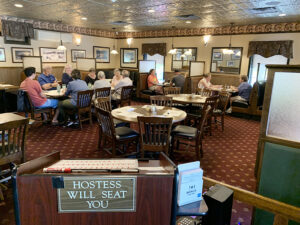 The Harvest operates seven days a week, closing only for Easter, Thanksgiving and Christmas — and a week in September, “to give the staff a little time off,” says Mrs. Hart, as well as make time for building maintenance and construction.

“John Cifone is our wingman,” she says. His construction firm has done all their expansions over the years. The Cifones and Harts are close friends.

Mr. Hart is big on long-term relationships and buying local. He mentions now vanished local mainstays like Dobert’s Dairy, Double-A Provisions and Leland Paper, as well as long-standing ongoing ones like Cifone and Mahoney Alarms.

The Harvest thrived during Covid — strictly on take-out — although Mrs. Hart notes that because of travel curbs, “we couldn’t come for 17 months.”

Despite his age of 82, Mr. Hart says they have no interest in selling.

“We have been approached many times, honest to God truth. The rumor spreads a lot,” without basis, he said.

Mrs. Hart says in terms of managing staff, she’s done “a lot of switching up from what I did 10 years ago.” She says that today “they work when they want to,” and that she’s almost always says yes when she’s asked for time off, but that she tell them “you gotta pay me back sometimes when I need to cover for someone.”

Mrs. Hart says many servers are single mothers, and she understands their circumstances can be challenging.

Mr. Hart says he urges young people, “You should have a goal. What do you want out of life? Do you want a house? What’s your goal?”

Rachael Ray a loyal lifelong customer; a pizza named for her

Rachael Ray, the Lake George High graduate who achieved national stardom through her syndicated TV talk show, her magazine, books, pet food and other involvements, is a lifelong customer of The Harvest, who has touted it to her viewers.

“I’ve known her [he puts his hand down low] — I know the whole family. Her father Jim, Elsa the mom. He used to bring Rachael in as a child.”

Ms. Ray has a standard order.

Ms. Hobbs said she knows the amount because she had to pay taxes on it the next year. — Mark Frost 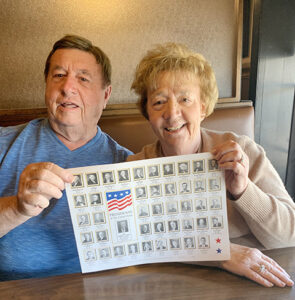 A paper placemat showing the current President and all his predecessors was as much a tradition at The Harvest Restaurant as pizza and New York Yankees memorabilia. They were so popular that the Harts shared them with teachers for their students. The tradition ended in an onslaught of argument and accusation, typical of the times. Some customers thought the Harts refused to update the placemat after Joe Biden’s election as President. But the Harts explained that the supplier Hoffmaster “merged with another firm and stopped making them.” That left President Donald Trump in the featured spot as the last one. “Do you know how many fights that has started?” the Harts ask. Some customers tore out the Trump image. Manager Jaime Hobbs said a woman “from Massachusetts was so drunk at the bar one night” that she bit out Trump’s face.
— Mark Frost