Glen Lake residents packed the Town of Queensbury Planning Board meeting on Nov. 26, united against the Great Escape amusement park’s proposed placement of a 165-foot Adirondack Outlaw ride visible from their homes.

The ride, as currently proposed by the Great Escape, would stand in the Wild West & Ghost Town area, the park’s highest elevated area.

It would exceed the 130-foot limit set for that area by the town’s 2001 environmental impact study setting guidelines for the Great Escape’s future growth. 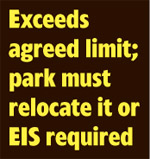 Park officials spent more than two hours presenting information on the visual and sound aspects of the ride.

This ruling then requires the Great Escape to submit a supplemental environmental impact statement before the board can vote on project approval.

Only member John Shafer voted no.

The deadline to be included in the Planning Board’s January meeting is Dec. 16.

After the draft submission, the board will review the document and hold an open scoping session to determine any additional measures or analysis they would like addressed. The board encouraged the public at Tuesday’s meeting to involve themselves in the scoping.

After the lengthy presentation, discussion and subsequent ruling, many people who signed up to speak decided to withhold their comments until the next step is complete.

In addition to visual impact, other topics of concern from both the board and the public included the motion of the ride, the impact on wildlife (including osprey, loons, eagles and other birds in the area), impact of the ride’s lights and colors, and impact of sound above the treeline — especially noise travelling over a body of water.

Glen Lake resident James Ogden said, “I disagree with idea that at 10 o’clock in the morning drinking a cup of coffee in my boathouse, that the impact of the next roller coaster or ride isn’t heard on my dock. I open up the invitation to the board to come sit in my boathouse on any weekday and listen to everything going on at the Great Escape.”

“I suspect many of you have been out on the lake at a quiet moment,” said Glen Lake resident John Cembrook. “You get quiet moments in the afternoon. Conditions are always variable. Have you ever heard a whisper on the lake? We hear it.”

“The prior presentation by the management team and attorneys of the Great Escape Six Flags, I’m reminded of a Mark Twain quote: ‘It’s lies, damn lies and statistics,’” Mr. Cembrook said.

Planning Board Chairman Mr. Traver counter, “I have been on the board for 12 or 13 years now, I’ve dealt with a lot of applicants.

“In my opinion, the gentlemen from the Great Escape are not lying. They may be omitting some information that maybe none of us have. You can disagree with some of the suppositions that they’re making. I do not believe that they’re misrepresenting or lying.”

The Adirondack Outlaw ride consists of a spinning arm with baskets for passengers on each end, the midpoint of which is attached to a stationary anchor in the ground. When in operation, the arm spins like a windmill, propelling passengers at 50 miles per hour at an apex of 16 stories. That apex rises above the treeline and is a main point of contention from neighbors of the Great Escape. The arm would be situated straight on towards Glen Lake and thus would appear to those to be moving up and down, rather than a circular motion. At rest, the ride would reach a height of 85 feet.