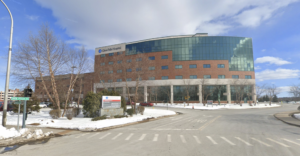 in a press release that it arrested William Palangi, 53, of Northvale, New Jersey, after officers witnessed him allegedly “damaging vehicles in the Glens Falls Hospital parking lot with a machete Thursday afternoon,” January 19.

The release said, “Glens Falls Police received a report that a black Jeep Wrangler – which was driving erratically on the Northway – was headed into the City after leaving the highway at Exit 18. Officers were dispatched to locate the vehicle, and it was discovered in the parking lot of Glens Falls Hospital, where officers saw Palangi damaging motor vehicles in the parking lot with a machete.”

Police said Mr. Palangi allegedly “then got in the black Wrangler and left the parking lot, only to be stopped by other officers while eastbound on Hudson Avenue, in front of the Hospital.”

The release said, “the machete that was reported to have been used to damage the vehicles was found in the front seat next to Palangi.”

Mr. Palangi was arraigned and was remanded to Warren County Jail due to lack of bail, the release added.