Six months after he rode his bicycle across the United States and back, Robb Freed of Glens Falls is doing it again to continue raising awareness and research money for the rare genetic connective disease epidermolysis bullosa (EB).

Mr. Freed’s son Drake E was born with disorder that affects only in 20,000 births in the U.S. EB sufferers have very fragile skin that easily blisters and tears, and internal organs are often affected as well.

“When Drake E was born in Glens Falls Hospital, his doctor, who had been delivering babies for 30 years, said she had never delivered a baby with EB,” Mr. Freed said. 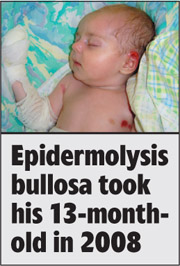 He said that within minutes, they noticed most of the boy’s fingertips were missing skin because he lacked a vital protein that binds skin together. Drake E passed away at 13 months in 2008.

“Bicycling became my therapy,” says Mr. Freed, who has worked as a chef and bartender locally. “Anyone who knows me knows I ride my bike everywhere. I’ll ride today, but I have no idea where I’ll go or how long or how far I will ride.

“I leave April 22nd from Yorktown, Virginia, and will be taking the famous bike trail called the Trans-American Trail,” he said. “It will take me right through the middle of the country, and I’ll stay in hostels, churches, fire stations, campgrounds, hotels and folks I connect with on a website called warmshowers.com.”

Mr. Freed said he will post frequently on his “Big Ride for EB” Facebook page, and blog at TheBigRideforEB.com. Tax-deductible donations can be made through that site. He said his ride is a sanctioned fund-raiser for the Dystrophic Epidermolysis Bullosa Research Association of America, Inc., a 501(c)3 tax-exempt non-profit based in New York City.

Mr. Freed says last year’s ride took him nearly eight months, and connected him with the EB community. “Meeting families and kids dealing with EB was so amazing,” he said. “I met one family who had lost a child like me. I had never met anyone with experience with EB before.

“How the EB community embraced me was just amazing. I almost became a voice for these families. I give them a voice.”

Riding a bike across the country and back twice, he admits, was not the best financial decision he could make. And it was hard work. “But this is what keeps me going,” he said. “This is my last time for a while. Not many people can say they have done what I have done, or I’m going to do.”

“This is not about Drake E, and this is not about me. He was a magical kid, and to keep his magic going is part of it. It’s my way of staying alive. It’s the thing I do that brings me joy. It’s my safe spot.

“Awareness of the disease is huge. No one has ever heard of it. If more people know about it and how painful it is, we can help these kids with quality of life issues.”

“When I’m riding and I meet people and tell them from Glens Falls, if they’ve heard of it they know one of three things: Talk of the Town, Sandy’s Clam Bar and the Adirondack Red Wings,” Mr. Free remarks.