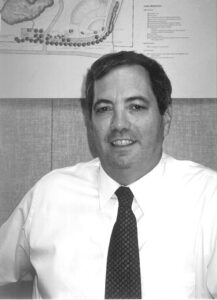 For years — decades even — Fred Monroe labored to make the state keep its promise to do something useful with the Scaroon Manor Resort property it bought in the 1960s with a deed restriction not to turn it into Forest Preserve and a pledge to use it recreationally.

For 40 years nothing came of it. The property stood idle, its buildings either removed or razed. Fred soldiered on.

“He really worked hard to get that new Schroon Lake campground built,” retired State Senator Betty Little told me Saturday. She said of Fred more broadly, “He really was a wonderful asset to the Adirondacks, knew the laws of the APA inside and out, as well as all the environmental issues, so he truly will be missed. A very, very nice smart guy.”

This newspaper editor got to know Fred well during the late stages of his Scaroon Manor fight when he finally started making headway.

One fateful night I sat next to him in the front row of the auditorium at Schroon Lake High School at a meeting to hear public input on the long-awaited plan to turn the property into a campground and day use area. (Fred had hoped the resort’s outdoor amphitheatre could be restored for performances, but the state only let the locals’ dream proceed so far.)

This night one person after another after another came to the microphone to say their piece. It went on for hours. It became repetitive. I started getting antsy.

I whispered to Fred, “Don’t you lose patience with this?”

He replied, “I really like hearing what people have to say.” There was no question in my mind he absolutely meant it.

That was the essence of Fred Monroe and why he was as effective as a native son could be in pursuing, inside and outside of government, the concerns of ordinary Adirondackers.

That’s why the Town of Chester changed from two years to four the length of its supervisor’s term. Fred served 24 years.

In 2011 the Scaroon Manor Campground & Day Use Area finally opened “on the west shore of Schroon Lake on Taylor’s Point and with 1200 feet of shoreline,” as the state Department of Environmental Conservation describes it.

“The campground, located in the Town of Chester in Warren County and bordering the Town of Schroon in Essex County, has storied history as a resort and is an important component of the local cultural heritage.”

Scaroon Manor was where part of the 1958 movie Marjorie Morningstar, starring Natalie Wood and Gene Kelly, was filmed. The resort had deep show business roots, particularly to the mid-20th century heyday of Jewish stars like Joey Bishop, Morey Amsterdam, Jan Murray and Sophie Tucker, who all performed here.

Much praise for late Fred Monroe

Saturday’s death of Fred Monroe of Loon Lake in the Town of Chester brought an outpouring of praise and condolence.

45th District State Senator Dan Stec said in a statement: “I can’t think of anyone who consistently did more over the span of many decades to be of service to the people and to the communities of the Adirondacks. Fred was just a wealth of knowledge, a great legal mind, patient, humble and always accessible…Fred, for so many reasons, will be dearly missed and his passion for our region won’t be forgotten.”

“The Warren County Board of Supervisors is saddened to learn of the passing of Frederick H. Monroe Jr….Fred’s accomplishments were innumerable, on the town, county and state level,” said a county press release.

“Fred was Chester supervisor for 24 years, and served as Chairman of the Board of Supervisors from 2008 through 2010…His tenure as chair coincided with the Great Recession, and his leadership helped county services survive massive revenue-related budget gaps…

“Fred was also instrumental during his time on the Board of Supervisors in helping extricate Warren and Washington counties from expensive contracts related to the Hudson Falls trash incinerator, saving the counties millions of dollars in the early 2000s.

“An attorney who served as court attorney in Essex County Court and operated a private law practice, Fred was a longtime advocate for the rights of landowners, residents and businesses in the Adirondacks. After leaving elected office, he focused his time on the Adirondack Local Government Review Board, which he chaired from 2005 through 2018.

“He has served as the agency’s communications director in the years since, sending out his daily news emails until just recently as his illness worsened.

The county press release quoted Rachel Seeber, Chairwoman of the Board of Supervisors: “Fred Monroe’s legacy in the town of Chester, Warren County and around the Adirondacks will not be surpassed. In addition to spending more than two decades as Town of Chester Supervisor, he served three years chairing our Warren County Board of Supervisors during an incredibly hard time as our region and the nation recovered from the Great Recession. His work as an attorney leading the Adirondack Local Government Review Board for more than a decade has been recognized around New York State as well. But most importantly, Fred was as genuine, thoughtful and kind a person as we have known. He will be deeply missed, and please keep his loved ones in your prayers as they and our community mourn Fred’s passing.”

Current Town of Chester Supervisor Craig Leggett was quoted: “His impact on the Town of Chester, Warren County and the Adirondack Region is immeasurable. He served with dignity and grace and his presence will be missed by all. Our thoughts and prayers go out to his family in this time of loss.”

Mark Behan of Behan Communications said on Facebook, “The Adirondacks has lost a quiet giant, and we have lost a friend and client of more than 30 years….His was a life of service … to his family and friends, his clients and community.

“In 1990, Fred was among a small group of attorneys and community leaders who formed the Adirondack Fairness Coalition to advocate for the rights of local property owners, families and residents. They successfully blocked a state plan to acquire an additional 1 million acres of private land in the Adirondacks and impose draconian zoning on what private land remained….

“Fred…in recent years had devoted his time to the Adirondack Park Local Government Review Board. He was widely liked, admired and trusted because he was a respectful, thoughtful listener who did not seek the limelight and did not engage in name calling or crazy rhetoric. He was patient with those who did, a disciplined thinker who sought the facts and a better understanding of the other side. His word was his bond. We were all so fortunate to work with and learn from Fred Monroe.