Even in winter Lake George real estate is hot selling

By Gordon Woodworth, Chronicle News Editor
Even in the dead of winter, real estate on Lake …

Even in the dead of winter, real estate on Lake George has been sizzling.

“It’s been a very active January and February, which is atypical,” said Dan Davies of Davies-Davies & Associates Real Estate. 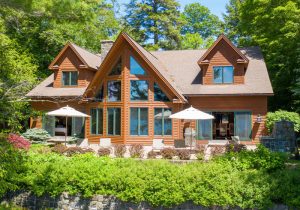 This 5,000-square-foot home on Assembly Point sold for $2.8-million on Valentine’s Day. It has five bedrooms, 5.5 bathrooms, a two-story granite fireplace and a boathouse with sundeck.

“Typically there are two or three sales in the southern basin, but we’ve had seven already, with several more that could be coming together in the coming weeks.”

There have been eight sales of $1-million or more on or around the lake in the year’s first two months.

Commercial sales have included the younger Dave Kenny buying the Georgian Resort for $8.5-million, and his uncle Dave Menter and sons buying the Park Lane Motel for $3.7-million.

But residential sales are also brisk.

On Feb. 14, a property on Lake Parkway in Queensbury sold for $2.8-million. And less than a week later, a home on Loomis Lane in Bolton sold for $2.55-million.

Another home in Bolton sold for $1.5-million in early February, and the year kicked off with a $1.72-million sale on Cleverdale.

“A lot of it is interest-rate driven,” Mr. Davies said. “A lot of it is taking money out of the stock market. It’s nice to see people investing money.”

He said he expects two more sales of more than $2-million to close in the next 30 days.

“Inventory is way down,” Mr. Davies said. “Usually, there are 50-65 properties on the market in the southern basin at this time of the year. Now there are 34.

“It’s been a busy time…People think they have to buy something now because there is so little out there. And it’s been a mild winter, and people had nothing else to do.”

Lonnie Lawrence of the Sherwood Group says, “It’s been busier than I ever expected for February, but the closings in 2020 were deals put together in 2019.

“A lot of clients have taken their property off the market for the winter, because they don’t want the listing to become stale. And we have some real nice stuff coming on the market in the spring.”

Linda Boden of Leavitt Realty said, “The market is holding. We have moved some properties, and that is good news for everyone, but the sellers usually need to sell, one way or another. The buyer is astute and will not overpay, for the most part.

“If a seller decides to hold out for ‘his price,’ he runs the risk of becoming a tired listing and losing more money than if he listened to his Realtor or the first offer.

“I think people are more careful with their money even if they have it, as there is uncertainty, and they do not want to be cash poor.”