End of the mug shot?

The Jan. 18 story quoted a Cuomo spokesman as saying the proposed amendment to Freedom of Information law is meant to combat websites that post arrest information and photos online and then try to have those arrested pay them to have the information removed.

Washington County Sheriff Jeff Murphy said the proposal “just seems to be in line with a lot of other things the Governor has proposed that seem to benefit criminals and felons. 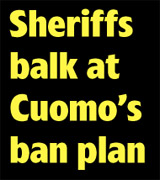 “We fully understand someone charged with a crime is innocent until proven guilty, but as police officers, we feel a duty to notify the public and be transparent and let people know when we do make an arrest.

“We’ve had to arrest people who work for us, and we posted those photos. We place our recent arrests on social media, and we post mugshots and the charges.

“To us, it’s also a deterrent. People don’t want their photo posted when they are arrested. We publish all of the people who are arrested and charged with welfare fraud. People know we take that very seriously, and someone might think twice about committing a crime like that when they see those reports.”

Warren County Sheriff Bud York said, “With all of this Twitter and Facebook, this social media, why not start curtailing that? So he wants to protect people who have been arrested more than in the past. I suggest he curtail social media instead of other people’s rights. I don’t know much about his proposal, but that’s what I believe.”

Sheriff Murphy added, “It’s important for law enforcement to show the public what they do. People have a right to know that information.

“Nothing surprises me about this governor. It seems like he proposes more legislation that benefits criminals and felons than those that benefit law enforcement.”