He says, “There’s a quote by one of the recent popes — he’s a saint now, St. John the 23rd. He wants every parish to be like a fountain in the middle of a town where everyone can come and take a drink, and I love that, especially since St. Mary’s is so near Fountain Square.”

“I want everyone in town to find this to be an engaging place to be,” says Father Scott. “And my goal would be if people say, ‘I’m not Catholic, but I like going.’”

He arrives after simultaneously serving two churches, in Ravena and Coxsackie.

Father Scott said he’s excited to be in Glens Falls. “I am told that this was a parish that priests would wait their whole life to hope to be assigned at,” he said.

“I’ve heard that over the years, everyone wanted to be in Glens Falls, because it was known for being very prosperous with the paper mills and the insurance industry and the white collar jobs, that…it’s always been a stable and flourishing community.”

“In the old days when the church had many priests, you were unlikely to ever get to go to Glens Falls and be the pastor until you were very late in your career because it was an honor that was earned through many years of service many other places.”

“I feel at age 46 very blessed to be alive at a time when I get to be the pastor of a church with such a proud history.”

“Part of living in upstate New York, I think, is experiencing in a lot of our wonderful towns, no matter how quaint and geographically beautiful they are, there’s a lot of what we call ‘brain drain’ — where people just can’t imagine building a life in the town where they grew up, because it feels like there’s no vision or prosperity. And I feel like Glens Falls is a place with both.”

Father Scott’s mother is from Troy and he grew up just outside Rochester in “a little hamlet called Pumpkin Hook.”

When did he decide to become a priest?

“I knew when I was 18 that I was called to do it. I had a huge feeling in my heart about it. And it was a realization, that I had spent my life up until then wanting to be a journalist because I wanted to spend my life informing people…And I realized after seeing a priest who I really admired in action, that my call was actually more fine tuned, that it was a communication call but it was to inspire people.”

But he took a winding journey to priesthood. He graduated from St. Bon-aventure University, 70 miles south of Buffalo, with a degree in journalism and mass communications.

Next he spent a year traveling with Up With People, doing community service and musical performances. 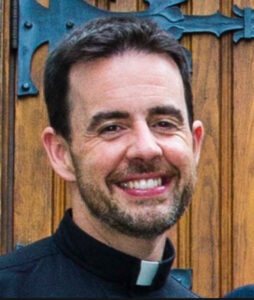 Then he spent years in upstate New York and Boston, including working with Americorps, driving a schoolbus, and managing foreign exchange students.

He also received his master’s degree in religious education from Boston College.

“Finally, I got a job teaching theology in a Catholic High School in Boston. And thus began my approach to the priesthood because I spent all day every day teaching religion to teenagers, and realized that I loved this, and that I was really good at it.”

He says, “I approached the vocation director of the Diocese of Albany and told him my story. And for the first year I taught in 2007, I moved to Albany.”

Father Scott confides that as a child, “I was faithful, but I hated church. I thought it was so boring. I was not a churchy kid.

“I was from a faith filled family, and we went to church every week, but I was one of those kids who, I would say, ‘Why would you go to church? Can’t I just talk to God?’

“And my mom would say ­— which many parents say to Catholic kids or other denominational kids — ‘After all God does for you. You can give God one hour a week.’”

Father Scott says, “I didn’t like church, because I thought it was just done so poorly. It was boring. It wasn’t engaging at all. And I guess I have a little bit of that kid in me even today, because I really want church to be engaging….

“It’s very important to me that we take all of the ancient treasure of our liturgies and our traditions, and make them very engaging for today’s people.”

Interviewing Father Scott in late August, before his move here, The Chronicle asked was it hard for him to leave Coxsackie and Ravena, where he’s been serving.

“Terrible, terribly difficult,” he said. “It’s excruciating for a number of reasons. One of them is that priests are celibate as part of our lifestyle, for the exact purpose of connecting and attaching like family to the people we serve.”

“So I see the people of my current parishes as my family, and they see me as their spiritual father. So to transition away from that is much more than a career move, or a logistical process or an administrative adjustment. It is a major cleaving of the family.”

Looking forward, he said, “When I arrive at St. Mary’s in Glens Falls, I will on that day have a new job, a new community, a new residence, a new mission, a whole new place to live. And I’m the executive of the organization. I’m the head of operations, essentially the CEO of a good size nonprofit. And I’m also the leader, the spiritual leader of a large school,” St. Mary’s-St. Alphonsus Regional Catholic School.

Heading the school will be a fresh challenge. “I’ve never had the school under my responsibility during my time as a priest.” But he calls it “very exciting, because my most lengthy earlier career was Catholic high school and middle school teacher. So I have a master’s in religious education from Boston College.

“And I’ve taught theology at the high school level in Boston for five years. And at the middle school level at St. Pius X School in Loudonville near Albany for two years. So I bring experience in education and love for Catholic education.”

The Chronicle asked how Father Scott approaches his new task.

“So the first thing I do is, believe with all my heart that I am called by God to go, that this will be a wonderful experience in my life. I feel very convicted that I am called to go to Glens Falls. I did not see it coming. But most of the most important things in life we don’t really see coming.”

“I also am willing to endure a period of newness and discomfort and homesickness and novelty….I have moved before. And I have learned from experience, how painful and exciting it is.”

His scheduled arrival was Sept. 1. “I will step into the role fully at the parish and the school on September 18th, and 19th.”