Does Glens Falls have the right to set leash laws in Cole’s Woods? City & Town: Yes

By Gordon Woodworth, Chronicle News Editor
The City of Glens Falls owns Cole’s Woods, but most …

The City of Glens Falls owns Cole’s Woods, but most of the property is in the Town of Queensbury.

So does the City’s dog leash law apply?

No, it doesn’t, wrote Lois and John Karhinen in letters to The Chronicle after our April 4 story on the city’s stepped up effort to require dogs in the park to be leashed.

But yes, it does, say the attorneys for Glens Falls and Queensbury.

Mike Mender, Glens Falls’s interim recreation superintendent, says of Cole’s Woods: “That it resides within the Town of Queensbury doesn’t alter the fact that the City owns it and therefore is the entity to set the rules for those who choose to use City property.”

Queensbury Town Attorney Robert Hafner agrees. “The Town has its own animal control law, but a private landowner, in this case the City of Glens Falls, has the right to impose any rules it wants and it’s something the private landowner can enforce.” 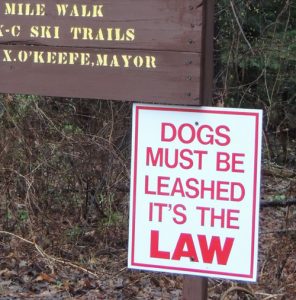 The City of Glens Falls has posted new signs around Cole’s Woods reminding people that “Dogs must be leashed, it’s the law. Chronicle photo/Gordon Woodworth

We wrote about topic after it was discussed at the March meeting of the city’s Recreation Commission. Mr. Mender reported receiving several complaints of dogs in Cole’s Woods being allowed off-leash. The City urged people to obey its leash law there.

Our story prompted several letters, including separate ones from Lois Karhinen and her husband John, challenging the city’s right to require dogs be leashed.

Mrs. Karhinen wrote that she was “emotionally assaulted” by another park user who objected to her pointer not being on leash. She insists that the dog was “under control” as stipulated under town law.

Mr. Karhinen asserted, “Cole’s Woods is in Queensbury, regardless of Glens Falls’ assertions about the ‘law.’ Queensbury’s animal control ordinance states that dogs must be on leash OR under control of the owner.”

Mrs. Karhinen says a member of the Warren County Sheriff’s Department told her that Cole’s Woods “is in the jurisdiction of Queensbury, not Glens Falls, and that the signage is not relevant to the woods.”

Warren County Sheriff Bud York, contacted for comment, calls it “one of those gray areas” that he clearly doesn’t want to step into.

He said if someone called 9-1-1 to report a potential violation of the City’s leash law in Cole’s Woods, “we would tell the Glens Falls Police Department…We don’t enforce City Codes. It’s something we would leave to the Glens Falls PD. We’d call them and let them handle it.

“You’re not going to find a police officer who would enforce leash laws. They would leave that for the animal control officer.

“For instance, if we got called to Warrensburg for a leash law violation, would a member of the Warren County Sheriff’s Office arrest someone? Absolutely not. We would document it and leave it up to the town.”

Glens Falls Mayor Dan Hall says he had not spoken to Police Chief Tony Lydon about Cole’s Woods. “It hasn’t been an issue,” he said, “except for the woman who wrote the letter and you writing a story.”

Mr. Mender said, “Again…we are trying to remind the public to be mindful of others who use Cole’s Woods. We’re encouraging cooperation and respect.”

City Attorney Ron Newell didn’t return a call seeking comment, but his associate David Klingebiel, who works on City issues with Mr. Newell, did, saying, “If Glens Falls posted signs at Cole’s Woods saying all dogs must be leashed, then it doesn’t matter what the Town of Queensbury leash law is.”