Editor’s note: As The Chronicle nears its 40th anniversary on Sept. 2, here is another article from our archive. It was an exclusive that we published on May 22, 1986, written by Chronicle editor Mark Frost and his University of Maryland School of Law classmate Clark Shaffer. 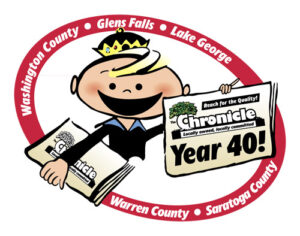 It was big local news when Frank J. LaPere was arrested here on Nov. 4, 1984. Drug enforcement agents swooped in on his secluded home on a mountainside overlooking Kattskill Bay on Lake George.

LaPere was identified as the Drug Enforcement Agency’s “most wanted” man in the Northeast.

He was sought in connection with the importation of some 300 tons of marijuana worth many millions of dollars.

It was even bigger national news, though, when LaPere testified in court in an arrangement that brought down a former U.S. Attorney and left LaPere with an ultimate sentence of no more than 2 1/2 years for LaPere.

Newsweek picked up the story, and in Boston, where the trial was, the TV statiions and the Boston Globe played it big.

David Twomey, against whom LaPere testified, is now in federal prison in Texas. Found guilty, he was sentenced to 16 years, for consecutive four-year sentences for four counts of obstruction of justice.

Twomey was an Assistant U.S. Attorney and Special Attorney with the New England Organized Crime Strike Force who, the jury decided, was the “mole” who kept tipping LaPere to what the law enforcement people were up to.

“Apparently the U.S. Attorney’s office was more interested in Twomey than in LaPere,” Harry Manion, one of Twomey’s attorneys, told The Chronicle. “It is totally amazing, given the magnitude and duration of his (LaPere’s) crimes. “What a country!”

LaPere had several aces to play. Besides his willingness to testify that a former U.S. Attorney was corrupt, LaPere disclosed that he had $1.7-million in cash and was willing to turn it over to the government.

“This $1.7-million was unknown to the government, unprovable by the government,” Assistant U.S. Attorney Janis M.Berry told The Chronicle. She prosecuted the case against Twomey. 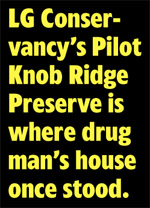 LaPere also agreed to turn over most of his real estate — or proceeds of it — to the Internal Revenue Service.

His two parcels in the Lake George area — the mountainside house overlooking Kattskill Bay and a farm across the road from the Dunham’s Bay Fish and Game Club — are now for sale.

In exchange for LaPere’s testimony, the government dismissed the most serious charge against him — “continuing criminal enterprise.”

LaPere pleaded guilty to smuggling marijuana in amounts ranging from five tons to 50 tons. He was sentenced to five years in prison. The sentence was cut in half after Twomey’s conviction.

The government also agreed to let LaPere keep a Florida estate said to be worth $800,000.

The government also granted LaPere immunity from additional prosecution for additional marijuana importation that may have occurred between 1978 and 1984.

“It was a great piece of lawyering,” Twomey attorney Manion said of LaPere attorney Martin Weinberg.

Weinberg told The Chronicle that his client also won an “explicit agreement” that LaPere will not be called to testify against any other persons. His client is “not an informant,” Weinberg stressed.

Twomey’s bad fortune was LaPere’s good fortune. Because the government was intent on convicting a U.S. Attorney gone bad, it was willing to trade away most of its case against LaPere.

“It was an incredibly marvelous result for Mr. LaPere,” said Twomey lawyer Manion. “He (LaPere) was clearly guilty of CCE — continuing criminal enterprise, which carries a minimum penalty of 10 years in prison…

“By LaPere’s own admission he was guilty of importing $30-million of marijuana and kidnapping. He got five years and he got to keep an $800,000 residence in Florida.”

(The “kidnapping” occurred in 1978 when LaPere says he discovered a man was using his dock to smuggle in a million dollars worth of marijuana. LaPere says he held the smuggler hostage for $500,000.)

But the government got what it wanted in the bargain — a conviction of Twomey. And LaPere played a crucial role.

“He was an extremely well-prepared witness who did a lot of damage,” said Manion. “He’s a very intelligent guy. I have a great deal of respect for his intelligence.”

Twomey is appealing, and his counsel Manion maintains he is confident of a reversal on various grounds including “improper judicial comment.”

Twomey was convicted on four obstruction of justice charges, but the jury found him not guilty of the more serious charges of bribery and conspiracy to import marijuana.

While Manion says LaPere was a good witness whose testimony was corroborated by one of LaPere’s associates and by documentary evidence, he said the bribery and conspiracy acquittals suggest the jury still had some skepticism.

“Had they bought LaPere’s entire act,” said Manion, “they certainly wouldn’t have acquitted Twomey on the two major charges.”

In reference to the bargain the government struck with LaPere, prosecutor Berry said the “deal was necessary and appropriate” in order to prosecute Twomey.

LaPere is described as being held “in federal custody” in an undisclosed location. His release, with time off good behavior, is expected within five to eight months.

Mark Frost’s note: That was in 1986. Now it’s 2020. Here are a few more details we’ve gleaned via quick Internet searches.

Twohey, the U.S. Attorney convicted of selling secrets, received from LaPere $210,000 cash and a 30-foot speedboat, court documents indicate. Elsewhere, the boat is identified as a Formula.

Twohey was said to be 40 years old in 1986, which would make him approximately 74 years old today.

In our quick search, we were not able to discover his whereabouts or even if he is still living. There are numerous people with his name.

LaPere was described in court documents as having smuggled $25.7-million worth of marijuana. We could not find out anything current about him either.

“After more than a decade of planning and negotiation, the 223-acre preserve was added in August 2000 to the list of protected lands within the Lake George basin,” the Conservancy details on its website. 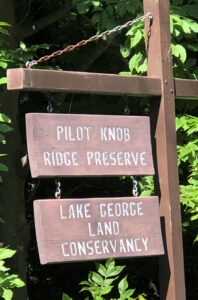 “Originally, this parcel was illegally cleared and a house and mile-long driveway were constructed. The five-acre house lot became a focal point throughout the south basin, because it disrupted the unbroken wilderness of the Pilot Knob range. Further proposed development would have greatly changed the quality and character of the entire basin.

“The property was subsequently confiscated by authorities and resold to the Zug family who stewarded the land for over 10 years. With the help of hundreds of donors and a selling price well below market value, the Lake George Land Conservancy was able to purchase the property from the new owners.

“This property, first named the Pilot Knob Ridge Preserve, was renamed on August 9, 2010 at a dedication ceremony in honor of LGLC’s past executive director, Lynn LaMontagne Schumann, who was instrumental in its preservation. Lynn passed away from breast cancer on March 13, 2010.”

It quotes Ms. Schuman as saying, “My greatest moment, came after we purchased the preserve. The organization made a significant decision to remove the house situated prominently on the hillside. It was a sunny spring morning when the wrecking crew began the process of demolishing the house. I peered out over the ridge and saw some 40 boaters anchored along the shoreline cheering as the house came down.”

The short but steep trail is very popular with hikers, so popular that is currently off-limits during coronavirus precautions.

The Land Conservancy says it “will remain closed to the public until after Labor Day (exact reopening date TDB).”