Coronavirus brought one downstate man and his family to an unexpected and eye-opening first trip to Lake George; now they’re sold on it.

They stayed at Dunham’s Bay Resort, whose manager Matthew Taormino alerted The Chronicle to their story.

Benzion Freundlich, who also goes by the first name Benson, is a native of England who transplanted to the United States about 20 years ago, living what he enthuses is “the American dream.” 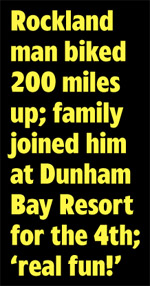 “I’ve lived in Rockland County for 16 years,” Mr. Feundlich says. “I never took a trip to Lake George, didn’t even really know it was up here, never thought about it, knew nothing about this place, or the beauty of Dunham’s Bay.”

Mr. Freundlich said he works in the diamond industry and travels internationally, typically taking his family on summer vacations to far-off places like China, France or Israel. When a planned family cruise was cancelled due to the coronavirus pandemic, Mr. Freundlich said he found himself with summer time on his hands.

An avid bicyclist, he joined his bicycle training partner, Avrom Horenstein, on a 200-mile bicycle journey to Lake George.

The friend planned the ride as a solo trek to raise funds for the Ariella Hohenstein Biker Cholim Society, founded in memory of his young daughter who died 10 years ago from a series of medical issues.

Mr. Freundlich said Mr. Horenstein has been coming here since he was a small child. “Lake George is his playground.”

Mr. Horenstein, who is older than Mr. Freundlich, planned to stay at a quiet place in Bolton Landing.

But Mr. Freundlich, whose wife and four children, ages 8 to 20, were driving up to join him after he biked here, wanted a family-friendly resort with activities. 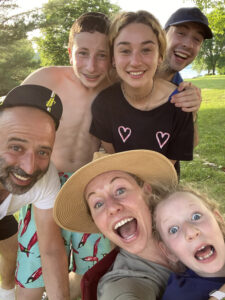 “I started looking around on the Internet and I found this place, Highland Castle, in Bolton Landing. A whole castle! It looked amazing!” But he laughs, “My wife…just rolled her eyes at me. ‘Could you not rent a castle?’…Alright. I’ll find something more reasonable.

“So I bumped into Dunham’s Bay. I studied the lake. I realized it was on this little cove. It does not have motels to the left or right. It has amenities. Some things, you see in a lot of places but this exceeds expectations.”

On July 2 and 3, the two men bicycled 200 miles to Bolton Landing — 130 hard miles the first day, through 97-degree heat, and 70 miles on the second day, ending with a 10-mile stretch on the Warren County Bike Trail, descending into Lake George Village on what Mr. Freundlich discovered to be “just the most gorgeous trail, to go 200 miles and be landing there on that.”

Mr. Freundlich and his family spent July 4 weekend at Dunham’s Bay Lodge. He said it was unlike any vacation they’d ever had. “The pool is huge, they have ping pong, real family fun. We could go out and rent a boat, but we really liked being at the resort. There was so much. We threw horseshoes, a real family activity.”

‘Really brings the family together’

Mr. Freundlich enthuses like a paid spokesperson: “We’ve been to St. Thomas, Cancun. This is the first place we went where, after, I turned to my wife and said, ‘I feel like we’ve missed 15 years of vacations.’ My kids told me they would ditch any vacation to come back here. It really brings the family together.”

He said, “The way they handled the coronavirus I thought was perfect. Fourth of July, we were having such an amazing day, it just flew by.

“Late in the evening, we saw a guy who said, ‘Nah, there’s nothing going on in Lake George Village,’ but we thought, let’s just go. And we had such a good time. We saw the big boats, there was music, people wearing masks, some people dancing. We did some shopping, got custom masks and shirts. We had a night to remember.”

Back home, Mr. Freundlich says he right away pulled out the family calendar and found another open weekend in mid-July to come back to Dunham’s Bay (not biking it this time).

“If I had to be honest,” Mr. Freundlich says now, “this is the cheapest vacation we’ve had, by a long shot, with memories that last longer, and we’ve been places. The whole family, my 20-year-old son, eight-year-old girl, they all enjoyed every minute. Everything was pristine, above and beyond.”

He said, “Not only did we come back. We met a bunch of people at the resort the first time. One also came back. We recognized each other and had dinner together. We realized, they live in Great Neck, we’re in Monsey. We’ve started a whole Dunham’s Bay little family.”

The Freundlich family returned later in July and aims for another visit before summer ends.

Editor’s note: As The Chronicle nears its 40th anniversary on Sept. 2, here is another …