Despite opposition including from Mayor Dan Hall, Chris Patten is holding firm to his plan to buy and develop the wedge of current green space he is under contract to buy from 333 Glen at the intersection of Glen and Bay Streets.

Now he envisions building 43 apartments, with no mixed use.

He told The Chronicle he plans to submit “fully comprehensive, fully conforming plans that will meet all GC-1 [General Commercial-1] requirements” in time to make the agenda of the next Planning Board meeting on Tuesday, April 6.

Mr. Patten terms “unattainable” the Planning Board’s call that he obtain an easement from 333 Glen to guarantee parking spots in the garage adjacent to the Travelers Insurance building.

He says it “forced me to rescind the offer giving the City 44 percent of the property to use as a park, which I had also offered to build myself. Now I will have to use the whole lot, in order to contain the parking on the site.” He notes that the front tip of the lot, closest to the Civil War monument, is already City property. 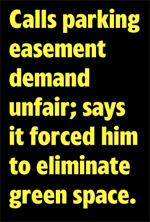 Mr. Patten said the constraints also led him to make the project all-residential, without first-floor commercial or retail.

He said he will “come forward with my strongest approach that conforms to all the requirements, meets green space, storm water, parking requirements — and the building will be beautiful. It will still mimic the old Glens Falls Insurance building” that occupied the site until the 1970s.

“I take the community responses into consideration. I really do,” Mr. Patten says.

He contends the newly sub-divided parcel is not eligible as a park “under the City’s 27 approved uses” in the GC-1 zoning.

Mr. Patten rejects the mayor’s offer to find an alternate site to develop, instead of this one across Glen Street from his mixed-use rehab of the old American Hotel.

“I’ve got Park Place,” he says, referencing the Monopoly board game. “Why would I exchange Baltic Avenue for Park Place?”

Mr. Patten believes unfair roadblocks have been put in his way, including the demand for the easement to guarantee parking in the garage.

He contends, “No other project has required an easement,” such as this.

Mayor Dan Hall told The Chronicle after Mr. Patten’s project was tabled at the last Planning Board meeting, for lack of specifics, “The City has made a statement that we are interested in keeping it as green space. That is what we prefer.”

The City’s Downtown Revitalization Initiative committee, overseeing Governor Cuomo’s $10 million grant to Glens Falls, has submitted a request to the state to shift the original DRI pocket park planned on South Street next to the former Dizzy Chicken to the 333 Glen Street site.

Of possibly taking the property by eminent domain, the mayor said, “We would be interested if we had to. We would hope it doesn’t come to that. This administration, and I’ve polled most of the Common Council, the intent is to keep it as green space.”

City Planning Board chairman Dan Bruno, contacted for comment, said, “I can’t recall” what other recent projects required parking easements, but in general, any project requires that parking be tied in, either by deed or permanent easement.

“There’s a lot to be considered,” Mr. Bruno said. “It’s the Planning Board’s function and authority as to what is acceptable,” in terms both of zoning laws and aesthetics.

“It’s a lot on a corner of high visibility, with traffic and parking considerations, as well as how the proposed building fits in with the rest of the area….

“We are there to help applicants and to look out for the best interests of the City, and the citizens of Glens Falls.”

Mr. Bruno says, “There is some consideration if the majority of the public is adamantly opposed to a project, but we have to put personal feelings aside and look at the project with respect to Chapter 220 (Zoning) and other considerations within our power.”

He said the preliminary sketches Mr. Patten provided at last month’s Planning Board meeting were “pretty basic, nothing we could really go on.”

Judy Calogero spoke in opposition to the Patten project at the last Planning Board meeting. She is a member of both the Glens Falls IDA and EDC Warren County and she formerly was Commissioner of New York State’s Division of Housing and Community Renewal.

“Walk the site,” she urged The Chronicle. “Access, square footage, how will it accommodate parking or emergency vehicles, handicapped parking, or people unloading groceries, moving in and moving out? The space is just not there.” 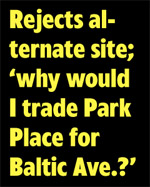 She also cited impact on the view of the Church of the Messiah, which she termed “one of the most important historical buildings in the City.”

She said, “I wish the owners [of 333 Glen] had come to the City to say, ‘We are thinking about selling the parcel.’ They’ve generously allowed the City to use the site for years. They could have asked, ‘Do you want it to continue as public space?’”

Ms. Calogero said, “Do I believe we need more development? Absolutely. Does every piece of property need to be developed? I don’t think so.”

Developer and business owner Elizabeth Miller, in a conversation with The Chronicle, said she hopes the city “does not miss” the opportunity she says Mr. Patten offers.

“There’s a huge opportunity there to achieve real economic development, with the right building, and if you hold the developer accountable without putting up roadblocks,” she says.