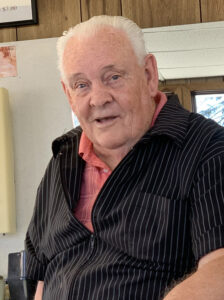 “Fitzy” Fitzsimmons grew up on Third Street in Glens Falls, graduated from St. Mary’s Academy and fondly recalls the heyday when downtown sidewalks on Thursday nights filled with “people going out to meet people.”

But Fitzy, given name Harold Patrick, is wholly Fort Edward now. “I came down here in ’62 and been here ever since. It’s my 59th year,” says the proprietor of Fitzy’s Barber Shop, across Broadway from Saint Joseph’s Roman Catholic Church.

Fitzy turned 80 years old Tuesday and went to work as usual. Does he think about retiring? “I’ll retire when I’m tired.”

Fitzy and his wife Linda live north on Broadway, up the hill from downtown. “I can throw it in neutral and never push the pedal and get to work,” he says, but actually he never drives to the shop directly. 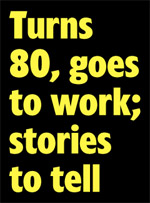 “I like to change it up.” He’ll first drive off in random directions to “break the routine.” He listens to some customers who are unhappy with their jobs and wonders why anyone would keep doing something they hated doing.

Of his second wife Linda, he says. “I met her 30 years ago. I wish I would’ve met her 60 years ago.” Along with his own son, Fitzy says Linda’s two children “are like my own.” He details all of their lives, the jobs, the spouses, the grandchildren.

Fitzy is a people person and a worker. Beyond barbering, he’s got 48 years in at the volunteer fire department, including having served as chief as well as a decade he spent as Washington County’s Deputy Fire Coordinator; 20 years he umpired high school baseball games; 20 years he delivered 900 or a thousand Post-Stars a night, stuffing 300 tubes, bringing the rest to stores. 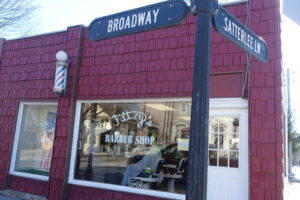 “I used to get up at midnight” to do the newspaper route. “There would be people out waiting for me at 2 a.m.” He said he’d get home at 6, sleep for a couple of hours, “grab a cuppa coffee” and then go to the barber shop. Even now, he says, “I only sleep three or four hours a night.”

Here’s how Fitzy became a barber. After high school, he did a stint in the Army. After that, “I had enough of school,” he says. “Joe Plude was my barber in Glens Falls. I kinda liked it,” seeing him “running the business, mingling with the people.”

Fitzy went to barber school in Rochester, because there were no spots at the time at the one in Schenectady. “I apprenticed up in Glens Falls with Mike Massiano.”

Bill Culligan had the Lunch Box in Fort Edward. “I used to stop in his restaurant. He told me ‘Steve [Puylara, Fort Edward’s then-barber] is gonna be retiring.’”

Fitz rented the shop, first from Steve and then from Steve’s widow. When she died, Fitzy moved down the street to the shop he has now.

What’s he think of Fort Edward?

Fitzy is wry. Best to listen carefully; he will pull your leg if you let him.

On the afternoon of this interview, Fitzy pulled back the barber cloth from one customer to show it said “Village of Fort Edward” on the back of the man’s T-shirt.

“He’s the mayor of Fort Edward,” Fitzy told me. He wasn’t.

As another customer reached the chair, Fitzy declared, “We’re doing nothing but buzz cuts today.”

“This guy here,” he says of a customer. “He was a legend. He was the biggest bachelor in town. I won’t go further. I’ll save your hide right there.”

“We give-and-take pretty good,” he says of his clientele. “I could probably give up barbering. The people — that’s why I come back. How can I give up Donnie here? I’ve been cutting his hair for 50 years. It’s tough when you’ve got so many friends.”

For the first 35 years, Fitzy’s hours were 7 in the morning to 6 at night because in Fort Edward’s boom time, “the guys coming out of the mill at seven in the morning — before they went over….[to] one of the bars, they got their hair cut.”

He said he used to cut residents’ hair at Fort Hudson nursing home before they set up a room for that purpose. Sometimes, he said, “I used to have to get down on the hard floor on my knees for some of them” in difficult postures in wheelchairs.

Fitzy’s mother and father both worked at shirt factories in Glens Falls. He mentions the York Rotary Shirt factory on Broad Street as well as McMullen. His mother was from Bennington, Vermont, his father from Brooklyn. They met in Glens Falls.

Fitzy’s grandfather, his mother’s father, was “Bill O’Malley — a big old tough Irishman,” who for a time lived with them.

Fitzy said Mr. O’Malley walked to work at Finch, Pruyn wearing “dress pants, shirt and tie” and changed into his work clothes at the mill. “You weren’t seen on the street in their work clothes,” he said.

On Third Street in the evenings, he remembers, people would be on each other’s front porches, “you know, just visiting. You don’t see that much anymore.” When the weather turned cold, they’d gather “inside, playing Michigan rummy for pennies.”

I asked if Fitzy ever thought of running for office. He did run, in the 1980s, he said, but “that’s a long story.” I insisted he tell it. He said he ran for village trustee, knocked on nearly every door and that his platform was: I want to do away with my job. They said, ‘You’re giving up barbering?’ I said, no, I’m giving up trustee. I think it’s past time they should consolidate the village and the town.”

Election day arrived. One of his barbershop customers comes in and says “I tried to vote for you but I couldn’t.” It was a pull-the-lever machine, and that whole row of candidate levers was locked.

Fitzy says the man in charge of the machines was working at the canal in Waterford and they had to get him to come up and unlock it. In the meantime, they used paper ballots, but there was “an hour or so” before the problem had been noticed and that he doesn’t know how many people didn’t get a chance to vote for him.

Fitzy said he lost by 11 votes. He says a judge got in touch and offered to throw the whole election out, but “I said no, I don’t wanna do that to these people.”

The defeat had a silver lining. Pretty quickly, he says, “I got to thinking ‘Thank, God,’” because “when people come to my door I want them coming for in for a haircut instead of ‘You know my neighbor just threw snow on my driveway.’”

Cars are another Fitzy passion. There are photos in the shop of “Cottonhead” Durkee’s car dealership and Fitzy recalls a long ago impromptu race “on the Adamsville Flats” with a Studebaker Avanti taking on Ben Aronson’s Corvette for a quarter-mile — “four or five telephone poles.”

“The two cars I would want are the Studebaker Avanti, a terrific piece of equipment, and the 1955 Chevrolet Bel Air.”