Chez Pierre at 50: Amazing tale of its origin

Chez Pierre was one of my parents’ favorite restaurants. It is also one of mine.

So I grew up knowing the post-World War II tale of how American soldier Joe Baldwin, from Glens Falls, met and married a young French woman, Pierrette, when he was stationed in France, how they moved here and opened Chez Pierre.

But until I sat down with Pierrette at length last week, I didn’t realize how little of the fascinating story I knew.

It’s all the more relevant now, because Chez Pierre is marking its 50th anniversary and founder and long-time chef Joe Baldwin died at 85 last November, leaving generations of his family carrying on.

“When Joe passed away two days before Thanksgiving, we had 156 reservations and there was no way we could close up,” says Pierrette in her strong French accent. Dinner was served.

Two weeks ago on July 14, Chez Pierre’s 50th Bastille Day extravaganza not only packed the house for the six-course, $80 per person night-long feast that included  Pierrette singing the French anthem “La Marseillaise” and other songs, the “A” list crowd included Rachael Ray and Barry Melrose of hockey and broadcast fame.

“We had 96 people,” Pierrette told me. “I push it to the limit. We turned away close to 50 people. This was the first one without Joe, but he knew we would do a good job. We don’t quit.”

There are three generations of Baldwins involved in Chez Pierre today, but it actually spans four generations because  Pierrette’s father, Pierre Silistrini, was very much key at the start.

Pierrette’s parents, Pierre and Marie, were French, but their own parents were Italian (the Silistrinis and the Toniolos). Pierrette said mines in her hometown of Homécourt, in northeast France, drew many Italians to work them.

Pierrette’s parents operated a bar there, and Pierre, an accomplished accordionist, entertained. “That accordion saved my life,” Pierrette says her father told her.

Homécourt is situated near the French border with Luxembourg and Germany. The Nazis occupied it during World War II. “My dad was taken 4 1/2 years, prisoner of war,” in Germany, Pierrette says.

She says the Gestapo liked to hear him play the accordion, the result of which is that “he got food” for himself and fellow  prisoners. She says the prisoners also received Red Cross packages.

Meanwhile, said Pierrette, she and her mother and aunt, struggled. “We had no food.” They operated the bar but resorted at times to stealing potatoes. The memories are vivid for Pierrette. She says some of the women in town “collaborated” with the Nazis. “They wore the nylons. My mother wore my father’s socks throughout the war.”

Pierrette remembers the Germans ordering lights out at night. She said her family went into “the shelter underground” where they secretly listened to a radio station from the nation of Andorra, the only place she said they could get real news of how the war was going.

“When the war was over in ‘44, it wasn’t over for us,” says Pierrette. “We still had Germans hiding in the woods. My dad never came back until ‘45. The Americans put him in a hospital to build him back. He was ready to die.”

Pierrette said that beyond Homécourt’s  coal and iron mines, “we had a big industry in our town in meat, all kinds of meat — foie gras, pâté, saucisson (sausages).” 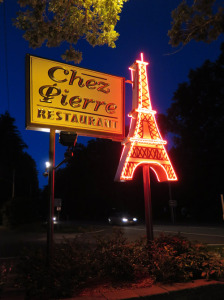 She said that in the years after the war, American soldiers were sent to Homécourt to obtain meat. Joe Baldwin, whose Glens Falls background was in refrigeration, was one of those G.I.s. “I wouldwave to them,” Pierrette says. “I was like 18.” At night, soldiers would come to her family’s bar.

She says several told her father, “I want to bring your daughter to America.” She says he responded, “Not so fast. I have only one. She not going nowhere.”

But he took a liking to Joe Baldwin. Pierrette said he was quieter than the others, and that he told her father that although he was poor, he would work hard to provide for Pierrette.

Joe went to work for the refrigeration business that Finch, Pruyn then operated.

Pierrette says, “My dad came to visit us. We were living in an apartment on   Harrison Avenue (in Glens Falls). I had a baby.” Pierrette’s parents ended up staying in America half of every year.

Pierrette had made her own way into the restaurant business, working at Glens Falls’s Gold Shade, operated by legendary Vince D’Emilio, who also owned The Garrison bar in Lake  George.

She says Mr. D’Emilio told her father, “I’ll lease you the Garrison. It was $6,000 for the season. We kept the Garrison for six years.” Joe would help on weekends.

Pierrette says that at the time there was a restaurant called Le Chalet Français in out-of-the-way Thurman. “All the waiters were from France,” she said, and after work they’d come to The Garrison.

“My dad would play the accordion. My mom cooked 8,000 pizzas for the season….I’d work until 3 in the morning. I’d come home and Joe would be going to work.” Pierrette says that even today, “I have guys come in: ‘Do you remember me from the Garrison?’” She says she quips, “What are you, 90?”

The Baldwins’ Garrison era came to an end. “My dad say, ‘Joe, I’m gonna give it up.’” But he wasn’t forsaking business.

When the former Bird Cage restaurant building on Route 9 in Wilton came on the market, Pierrette’s father bought it, over her fierce objection.

“I cried,” she says. She said she told Joe, “I don’t want a restaurant. I was raised in a restaurant. I have a baby.” But she says there was no way out, that a lawyer tricked Joe into signing a paper that committed them to it.

It was “four walls,” an empty building that needed everything, says Pierrette. “I had $10,000 in the bank — how on 60 bucks a week, I don’t know. I still say, I had an angel over me.” They equipped the restaurant.

Pierrette told “Uncle Vince” she was leaving the Gold Shade. “He cried when I left him. I cried, too.” The D’Emilios were godparents to her daughter Pia.

On the eve of Chez Pierre’s debut, Mr. D’Emilio brought his hunting club in for dinner. “They brought deer, pheasant, all wild” food for the Baldwins to prepare. “They started with 60 people. They ended up with 92,” says Pierrette, describing an overwhelming, nightmarish scene.

Maybe after that initiation, operating the restaurant itself seemed easy.

Joe taught himself to be a chef. Son Pierre went to the Culinary Institute of America. Daughter Pia and husband Lincoln Field, Chez Pierre’s chef, own the restaurant now. Pia went to Paul Smith’s and Cornell, Lincoln to Paul Smith’s.
(The Baldwins’ two other children are Patricia, an attorney in Port St. Lucie, Florida, and Patrick, owner of Baldwin Landscaping.)

In Chez Pierre’s early years Pierrette’s father entertained on the accordion. “I have that accordion upstairs,” she says. “He had two. The other I gave to the museum in France.”

The Baldwins at one point attempted a second restaurant in Schenectady, which Pierrette said proved the truth of a French expression, “Don’t ever chase two rabbits at the same time. You lose them both.”

A photo on the wall spotlights Lucille and Admiral Gene Markey, who owned Calumet Farms and whom the Baldwins became particularly close to.

The Markeys owned Alydar, which narrowly lost to Affirmed in all three Triple Crown races in 1978, the last time any horse won the Triple Crown.

If the great race-horse Alydar could go to Saratoga Restaurants, he would naturally choose Chez Pierre, because his owner and his trainer often dine there,” says a plaque on the wall, quoting from the publication Horse Sense.

Pierrette says it irked Affirmed’s owners, the Wolfsons, who also dined at Chez Pierre though not nearly as often.

Pierrette tears up thinking of Joe. “I had the nicest guy. I miss him so much,” she says. “I picked the best of the bunch.”