LG boat inspections are going smoothly, even on 4th of July

“We de-conned about 400 boats, so we’re running about a 6 to 7 percent decontamination rate, which is pretty close to what we expected,” he said.

“The public attitude and experience with this has been extremely positive…even more so than we’d hoped for.”

Mr. Wick says factors contributing to the success so far include their being well staffed, inspection times of generally less than five or six minutes, that there’s no cost to the boater, and that boats are tagged so they don’t have to be reinspected if they don’t go to some other waterbody.

Even on the busy 4th of July weekend, the program went “fairly flawlessly,” Mr. Wick said. At the busiest launch site, Norowal Marina in Bolton, he said the inspectors processed boats faster than the boats could be launched. 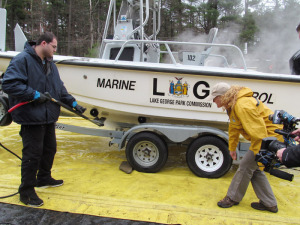